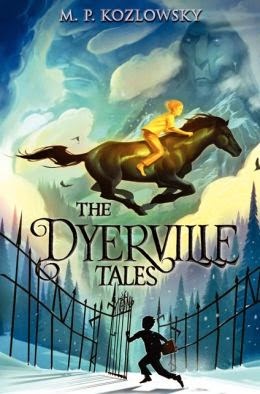 Neil Gaiman's Coraline meets Anne Ursu's Breadcrumbs in M. P. Kozlowsky's The Dyerville Tales, a powerfully imaginative middle-grade novel that blurs the line between fantasy and reality, from the author of Juniper Berry.

Vince Elgin is an orphan, having lost his mother and father in a fire when he was young. With only a senile grandfather he barely knows to call family, Vince was interned in a group home, dreaming that his father, whose body was never found, might one day return for him. When a letter arrives telling Vince his grandfather has passed away, he is convinced that if his father is still alive, he'll find him at the funeral. He strikes out for the small town of Dyerville carrying only one thing with him: his grandfather's journal. The journal tells a fantastical story of witches and giants and magic, one that can't be true. But as Vince reads on, he finds that his very real adventure may have more in common with his grandfather's than he ever could have known.

Its unique voice and ability to combine creepiness with great story and character development make The Dyerville Tales a real standout middle-grade novel.

Browse inside the book here and find out where you can purchase it here.

Don't miss all the interviews, giveaways and much more! This tour will be stopping by Mundie Kids on April 30th & May 5th.