Once Upon a Dream: From Perrault's Sleeping Beauty To Disney's Maleficent by Charles Solomon, Book Review 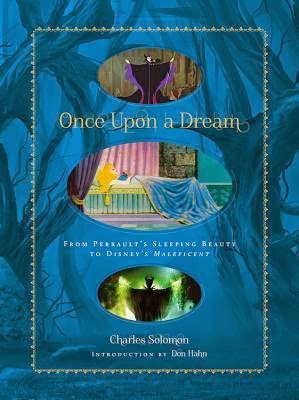 Source: book from publisher to review
Add it to Goodreads

With its themes of a beautiful princess, a dashing prince, and love triumphing over powerful magic, "Sleeping Beauty" remains one of the most beloved of all fairy tales. The story was first published by Charles Perrault in 1697. Perrault's vision of the ageless, enchanted princess slumbering in her vine-encrusted tower has fascinated readers and artists for more 300 years three times as long as the heroine slept. This heavily-illustrated book will trace the history of that fascination, which has manifested itself in literature, fine art, poetry, music, and film.The most celebrated cinematic version of Sleeping Beauty is Walt Disney's, the glorious finale of the animated fairy tales he began in 1937 with Snow White and the Seven Dwarfs. Although Briar Rose/Aurora was the most beautiful and beautifully animated of the Disney princesses, the film was dominated by Maleficent: Perrault's shriveled old fairy was transformed into the epitome of the lovely but terrible sorceress of fantasy literature. The book will conclude with the development and creation of Maleficent, including interviews with Angelina Jolie, Imelda Staunton, Linda Woolverton, Sean Bailey, Joe Roth, Don Hahn, and director Robert Stromberg (Oscar-winning art director of Avatar and Alice in Wonderland); behind-the-scenes details and photography; costumes, props, and makeup; and plenty of movie magic!

This book is movie and animation magic brought to life, aka book form. Being a huge Disney fan, I loved seeing the behind the scenes of one of my favorite childhood Disney movies. I'm fascinated with the behind the scenes, and history of things, especially with what inspires a story. This book gave me all that and more.

Though this book was released around the same time as the movie Maleficent was, fans of the story of Sleeping Beauty, and Maleficent will enjoy all this treasured coffee table sized book offers. From the history and making behind the original story that started it all, to the movie, and story magic of Walt Disney's beloved Sleeping Beauty, and finally to what inspired the movie, Maleficent. This book is broken up into three sections. Section I gives the history of the original story, Section II takes fans on the behind the scenes of the making of Walt Disney's Sleeping Beauty movie, and Section III is the behind the scenes on the movie Maleficent.

I was totally fascinated about the similarities, and the changes between all three stories/movies, and what inspired those changes and why. I loved the rich details that went into Disney's versions of their movies. No little detail went unnoticed. Most importantly, I was fascinated about the differences between Sleeping Beauty and Maleficent as movies. I liked that while they had some similarities with their stories, over all Maleficent is it's own story, and one that introduces fans to her Fae world. Being a huge fan of  Disney's trademark animated films, I loved reading about all the details that went into making Sleeping Beauty the most.

I think fans of all ages will enjoy this book. There is a lot that readers will get to know about the movies, and stories. There's a beautiful collection of artwork, the history of the stories, and the movie magic that went into Sleeping Beauty and Maleficent all captured within the pages of this book. It's definitely one I'd recommend spending the afternoon looking through and reading.