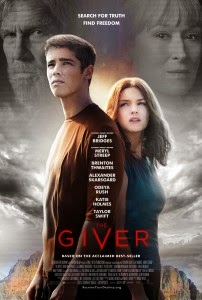 A fantastic movie for the whole family to see!

On Monday I was invited by Walden Media to attend a live stream event for The Giver movie. As some of you know, I was a little hesitant about this movie, because of the modernization the trailer showed. If you've read The Giver, you know this is a classic book with a timeless feel to it. I didn't think it was something a movie could capture. I am so glad I was proven wrong on that.

During Monday night's live stream premiere, Jeff Bridges's invited Lois Lowry to join he and the rest of the cast on stage. There he invited her to say a few things. She mentioned that 18 years ago Jeff Bridges had approached her about doing The Giver movie. 18 years later the movie is made, and she said it was made at the right time. I loved hearing that, because it made me realize this was a movie that was out of a love for the story.  I agree with her statement. I think this movie was made at the right time now.

With some recent adaptation box office flops, I was sceptical about this movie. I feel too many movie studios who adapt a book to the big screen miss the purpose of the story, or fail to convey what the readers of the book love about the story. It seems like few adaptations that are made, are created by people who love the story just as much as the reader does. That's not something I felt was the case with this movie. This movie captured the basics of what I loved about the book.

This movie was one that surpassed my acceptations. The modernization I feared that would ruin the movie, made the movie. With a recent rash of movie adaptation flops, The Giver is one that stayed true to the basics of the book. It made me feel the same emotions I had when I read the book, and brought those same thoughts I had while reading it to the surface while watching the movie.

The movie had a cast of characters that delivered a brilliant performances, and brought a beloved story to life. Cast wise, I don't think they could have chosen a more perfect cast to bring these characters to life. Jeff Bridges was The Giver. His role was so well done, as was everyone else's, including Brenton Thwaites, who plays The Receiver. 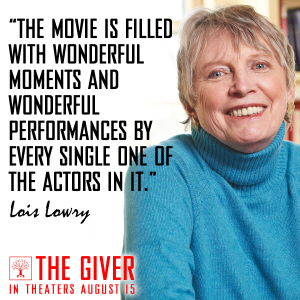 I totally agree with Lois's quote. This movie is filled with wonderful moments, and the performances by the entire cast were great. The best performances by far were of that of the The Giver and The Receiver. The sequences through which The Giver shares the thoughts and emotions through out the history of man kind were moving. The movie captured the essence of human nature, just as the book did, both good and bad. As a movie goer, you see and understand why there is a place that is created where everyone is equal, and emotions are void. But through the Giver and the Receiver, you also see the importance of being able to feel those emotions, and understand why the Receiver makes the crucial choices he does. The sequences towards the end of the movie were the most moving to me. 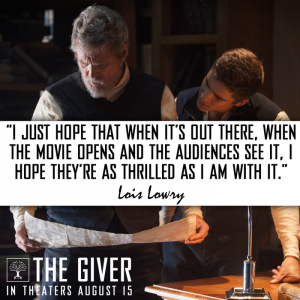 As I mentioned above, all the thoughts and I feelings I had when I read The Giver where ones I had while watching the movie.  Yes, some things are different than the book, but that is what an adaptation does. If done correctly, it captures the essence of the book, and changes some things to create a story that both fans of the story, and those who haven't read it, will enjoy. Which in my opinion was done elegantly in this movie.

This was a beautiful movie that conveyed the same powerful, and important message the book did.

I had the chance to take my youngest sister to the live streaming event with me. The Giver is one of her all time favorite books. She shared the same sentiments about the movie I had. I'm looking forward to seeing this movie again. It's a great family film, and one I will be taking my kids to see.

If I had to rate this film, I would give it a 4/5 stars.
*Thank you to Walden Media for inviting me to the live screening of the movie premiere.