Hello & welcome to today's cover reveal for Stu Gibb's EVIL SPY SCHOOL, which will be released on 4/21/15 from Simon & Schuster.
Stu has really been skyrocketing in terms of his popularity with kids and EVIL SPY SCHOOL is the third in a series featuring SPY CAMP and SPY SCHOOL.

Check out the cover!! 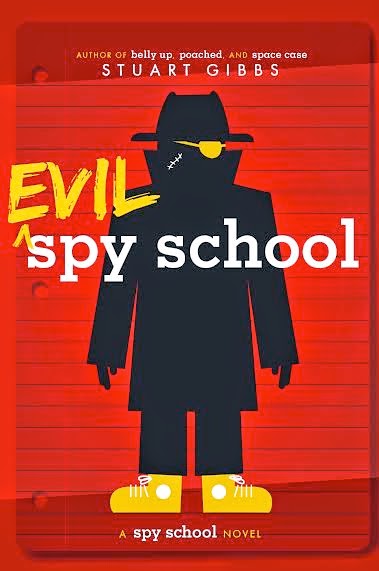 EVIL SPY SCHOOL
During a spy school game of Capture the Flag, twelve-year-old Ben Ripley somehow accidentally shoots a live mortar into the principal’s office—and immediately gets himself expelled. Not long after going back to the boring old real world, Ben gets recruited by evil crime organization SPYDER.

As a new student in SPYDER’s evil spy school, which trains kids to become bad guys with classes like Counter Counterespionage and Laying Low 101, Ben does some secret spying of his own. He’s acting as unofficial undercover agent, and it becomes quickly apparent that SPYDER is planning something very big—and very evil.

Ben can tell he’s a key part of the plan, but he’s not quite sure what the plan is. Can Ben figure out what SPYDER is up to—and get word to the good guys without getting caught—before it’s too late?

What do you think of the cover? This cover gets a big thumbs up from us!

The Tour
Stu will be on tour promoting SPACE CASE (on sale now!) with Will Alexander, the National Book Award-winning author of AMBASSADOR. Check out where you can meet them at: