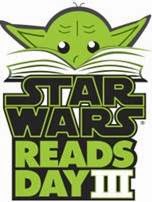 From the youngest Stormtrooper to the wisest Jedi, this October 11th, artists, authors, educators, librarians, book retailers, and readers will join forces to celebrate the global phenomenon of Star Wars Reads Day!

An official Star Wars event kit (free of charge), including reproducible activity sheets and trivia, is available as a printable PDF in colorand black and white, and for event updates and more information, follow Star Wars Reads Day on Facebook and the #starwarsreadsday on Twitter.

May the force of reading be with you!