Celebrate Halloween with Disney Jr!
This week I'll be posting reviews for some of Disney Jr's recently released Halloween themed board books, which make the perfect treat for little readers. 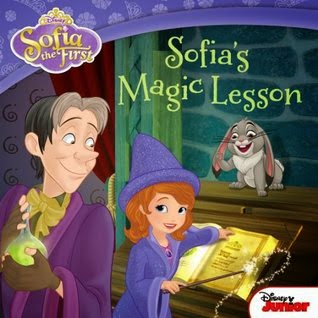 By: Walt Disney Company
Published by: Disney Press
Series: Sofia The First
Released on: 5.6.14
Ages: 4 & up
Rating: 4 Owlets
Source: book from publisher to review, in exchange for my honest review
Add it to Goodreads

When Cedric makes Sofia his apprentice, she doesn't suspect that he is after her magical amulet yet again. But the magic of friendship is the true lesson to be learned when Sofia helps Cedric out of a "tricky" situation.

Another great Disney book for children, that was taken from an episode of Sofia The First. My daughter loves this series, and I love that again, Disney has created a book based on an episode of this beloved character. Though Sofia's Magic Lesson isn't Halloween themed, this story does make a great addition to those looking to add some cute story's with a great message to their collection of Halloween themed children's books.

Like each of Sofia's story, there's always a lessoned to be learned. This time Sofia teaches Cedric the important of friendships, and trust. When is having troubles learning new spells she turns to Cedric to help. Although Cedric is out to get Sofia's special purple amulet, Sofia learns there's more to Cedric than anyone knows. She helps him over comes his insecurity and not feeling like he'll ever measure up to how great his father was. Not only does Sofia prove Cedric is a great sorcerer, she always does something nice for him, that no one else has ever done.

Fans of Sofia the First will enjoy reading this story.