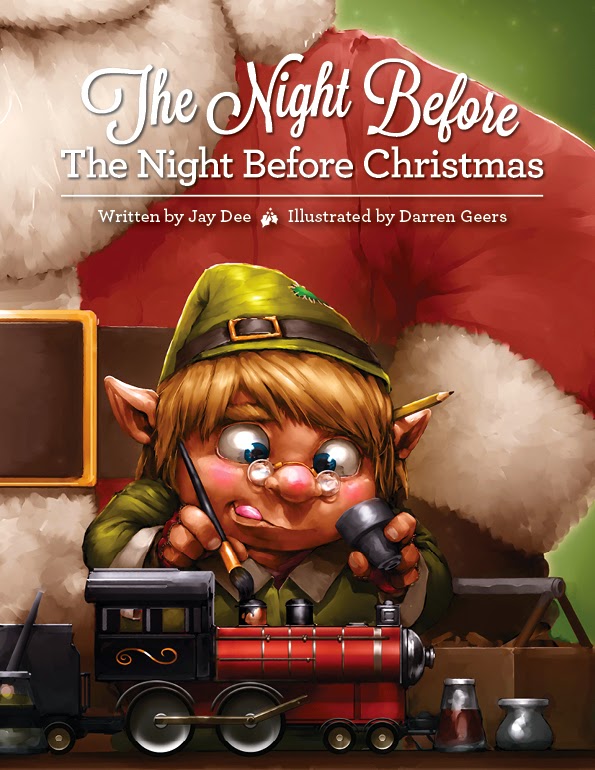 By: Jay Dee
Illustrated by: Darren Geers
Published by: Kraine Kreative
Released on: 11.3.14
Source: book from author to review, in exchange for my honest review
Rating: 3 Owls
Add it to Goodreads

It's the night before the night before Christmas and the elves are frantically trying to get the last of the toys made before Santa's inspection. One of Santa's elves, Elfie, isn't ready yet. He has spent all day working on one present. In working hard to make the toy train perfect, he hasn't finished the rest of his list of toys to make. With Santa's arrival,  he fears he's let Santa down. Not only that, he's let his lead elf, Nathan down. Nathan kept telling him to stop spending so much time on the one toy. Santa surprises Elfie. He tells him that the train is perfect, and it's Elfie's best work yet. He tells him that the train is for someone special. Elfie wonders who it's for. When he asks Santa who it's for, Santa tells him it's for baby who's name is Jesus and who is being born in a stable in Bethlehem.

I liked how the author was trying to tie together the story of Jesus and Santa, but I felt the attempt failed by having Santa deliver a train to baby Jesus at the time of his birth in Bethlehem in a stable. Why would Santa take a train to baby Jesus? Giving a toy train to a baby Jesus at a time when trains didn't exist doesn't make sense to me.  I liked the idea of Santa wanting to give a gift to Jesus, even though the belief in Santa wasn't around during this time. I would have loved it if Santa had told about the birth of the Savior, and had the train gift symbolize the importance of giving to others.