10 Books for Middle Schoolers to Read Over the Summer 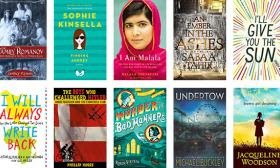 Personally I've not read all the books listed here. Since I can't personally talk about each book, I've included the description of the book from the original article that Common Sense Media shared. Check out their list of 10 Books For Middle Schoolers To Read Over Summer below:

Common Sense Media is looking for more MG recommendations. If you have some recommendations, head over to their post HERE and let them know what other books you'd recommend MG readers pick up this summer. This has inspired me to start working on my own personal list of recommendations, as I feel there are a lot of great books left off this list.

I'd like to know, what other MG books would you recommend reading this summer? Let's share the MG book recommendation love. Please share your recs in the comments below. As always, we recommend that you read or at least look into each book before you have your child read it.