Hello and welcome to today's stop in THE VANISHING ISLAND, blog tour, hosted by Walden Pond Press. I'm so thrilled to celebrate the upcoming release of Barry Wolverton's newest book, THE VANISHING ISLAND. Middle Grade readers will be familiar with Barry's previous release, Neversink. If you haven't read it, I recommend it! Today I'm happy to welcome Barry Wolverton to Mundie Kids, to talk about his upcoming release.

The Dutch Bicycle &Tulip Company
By Barry Wolverton
In many ways, the Age of Exploration (Euro version) was also the Age of International Commerce. It’s pretty fascinating to read about how the historical British and Dutch East India Companies worked. They had boards of directors and investors and sold shares to the public. The whole system was similar to a stock market (or perhaps a commodities market), and like any good financial market, it had bubbles. In fact, the real-life “Tulip Mania” of the 17th century is considered by some the first stock market bubble. You should read about it if you haven’t. It’s way more interesting than the housing bubble.
Don’t worry, THE VANISHING ISLAND doesn’t take place in boardrooms and delve into stock trading, but all of that certainly factored into how I developed my alternate-history version, the Dutch Bicycle & Tulip Co.
I’m sure some people will want to note that the first bicycles weren’t produced until the 19th century, so this is probably a good time to explain my guiding rule for writing alternate history: Do whatever you want, as long as it’s a least plausible. The bicycle is such a beautifully simple machine, there’s nothing about how it works or the materials needed to suggest it couldn’t have been invented earlier. I’m frankly surprised that no one has unearthed a millennia-old bicycle prototype in China by now.
Besides, “Dutch Bicycle & Tulip Company” is just a much cooler name than “East India Company,” and also allowed us to create an awesome real logo for the fake company.
Anyway, “Return on Investment” was a powerful force at work in the Age of Sail, whether you were captain of a company ship, an explorer seeking new land, or mere treasure-hunter. It’s a key idea as the plot of the book evolves and Bren begins to doubt the sanity of the Dutch admiral he’s signed on with, and I hope readers appreciate the book’s slightly warped take on what words like “treasure” and “treasure map” really mean. 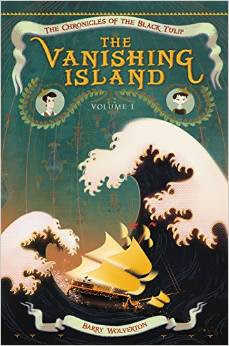 Does  the Vanishing Island really exist? And if so, what treasure—or terrible secret—was hidden by its disappearance?

It’s 1599, the Age of Discovery in Europe. But for Bren Owen, growing up in the small town of Map on the coast of Britannia has meant anything but adventure. Enticed by the tales sailors have brought through Map’s port, and inspired by the arcane maps his father creates as a cartographer for the cruel and charismatic map mogul named Rand McNally, Bren is convinced that fame and fortune await him elsewhere. That is, until his repeated attempts to run away land him a punishment worse than death—cleaning up the town vomitorium.

It is there that Bren meets a dying sailor, who gives him a strange gift that hides a hidden message. Cracking the code could lead Bren to a fabled lost treasure that could change his life forever, and that of his widowed father. But to get there he will have to tie his fate to a mysterious Dutch admiral obsessed with a Chinese legend about an island that long ago disappeared from any map.

Before long, Bren is in greater danger than he ever imagined, and will need the help of an unusual friend named Mouse to survive. Barry Wolverton’s thrilling adventure spans oceans and cultures, brings together the folklore of East and West, and proves that fortune is always a double-edged sword.

THE VANISHING ISLAND will be released on September 1st, 2015. You can pre-order it from Amazon | B&N. Add it to Goodreads. 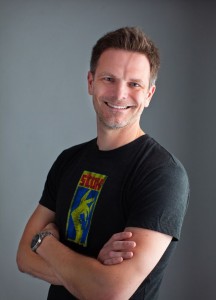 Barry Wolverton is the author of Neversink. He has more than fifteen years’ experience creating books, documentary television scripts, and website content for international networks and publishers, including National Geographic, Scholastic.com, the Library of Congress, and the Discovery Networks. He lives in Memphis, Tennessee. You can visit him online at www.barrywolverton.com. You can also visit Barry on Twitter, Facebook, and Instagram.

THE GIVEAWAY
Thank you to Walden Pond Press, I have a SIGNED arc of THE VANISHING ISLAND to giveaway to one lucky follower. To enter, please fill out the form below. US residents only.