If you're looking for a new MG book to pick up, read this one!!
Alistair Grim's ODDITORIUM is a fantastic read. I'll be sharing my review for it tomorrow here on Mundie Kids, as well as Mundie Moms. Earlier today on MM's, I hosted a blog tour stop for it. Since it's a MG book, I'm featuring the tour stop here on Mundie Kids as well. 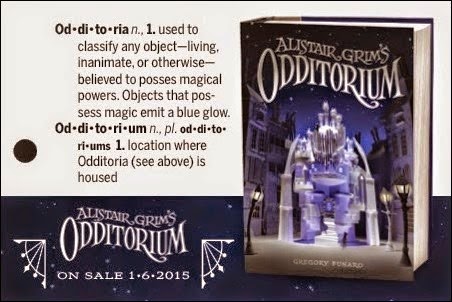 Welcome to the Alistair Grim's ODDITORIUM blog tour!
This is the first book in an exciting middle grade series by Gregory Funaro. Published by Disney Hyperion, it's said to be Doctor Who meets Charlie and the Chocolate Factory. 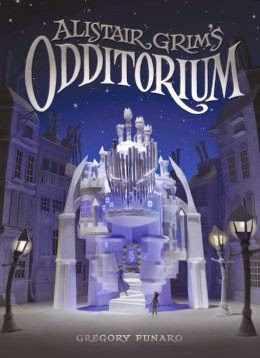 This cinematic, action-packed middle grade fantasy adventure set in Victorian London brims with fresh magic and has the cozy feeling of a classic.

Grubb, age twelve (or thereabouts), has never known anything beyond his miserable existence as a chimney sweep, paid only in insults and abuse by his cruel master.

All of that changes the day he stows away in the coach belonging to a mysterious guest at the inn that he is tasked with cleaning. Grubb emerges from Alistair Grim's trunk and into the wondrous world of the Odditorium. Fueled by a glowing blue energy that Grubb can only begin to understand, the Odditorium is home to countless enchanted objects and an eccentric crew that embraces Grubb as one of their own.

There's no time for Grubb to settle into his new role as apprentice to the strange, secretive Mr. Grim. When the Odditorium comes under attack, Grubb is whisked off on a perilous adventure. Only he can prevent the Odditorium's magic from falling into evil hands-and his new family from suffering a terrible fate.

Grubb knows he's no hero. He's just a chimney sweep. But armed with only his courage and wits, Grubb will confront the life-or-death battle he alone is destined to fight.

Yesterday fans were introduced to a few of the characters from the ODDITORIUM, and today I'm thrilled to introduce you to a few more.

Glossary of Odditoria
Not to be confused with Mr. Grim’s Odditorium (which ends with an “um”), loosely defined, the word Odditoria, at once both singular and plural, is used to classify any object living, inanimate, or otherwise that is believed to possess magical powers.

Some relevant Odditoria at Mr. Grim’s:
Dougal “Mack” McClintock: Chief of the Chronometrical Clan McClintock, Mack is a Scottish pocket watch who likes a good brawl now and then.

Gwendolyn, the Yellow Fairy: A wood nymph who is very fond of chocolate and gobbling up nasty grown-ups.

Cleona: A mischievous banshee prone to wailing and playing tricks on people.

Animus: The mysterious blue energy that powers the Odditorium’s mechanics.

Broom: The Odditorium’s maid, she is just that, a broom.

Doom dogs: A pack of vicious shadow hounds charged with fetching escaped spirits back to the Land of the Dead.

The Eyes of Mars: A pair of magical orbs that the Roman god of war gave to his twin sons,

Romulus and Remus. Alistair Grim has one Eye, and Prince Nightshade has the other.

The Lady in Black’s Mirror: A silver-handled mirror with dark glass that Mr. Grim keeps on his desk.

Number One: A large, mechanical wasp.

Thunderbirds: An even larger species of bird indigenous to North America.


The Black Fairy: An evil winged demon and Nightshade’s second in command, he excels at blowing up things with his bolts of nasty black fire.

Shadesmen: The long-dead armies of Romulus and Remus resurrected by Prince Nightshade.

Red Dragons: A clan of half-human serpents that are enemies of the shinobi.

Phantom: One of Prince Nightshade’s horses, he can fly and spit fire.

Borg Gorallup: A Norwegian troll and oft-featured gladiator in Prince Nightshade’s tournaments, he holds an impressive record of seventeen kills.

Moth Man: Known as the Silent Assassin, this newcomer from the Americas boasts a record of nine kills, each in less than a minute.

Moosh-Moosh: A pint-sized goblin that tops out the prince’s fighting roster with an unparalleled record of twenty kills even 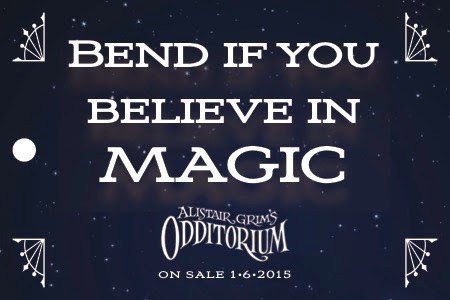 Don't miss this week long Alistair Grim's ODDITORIUM blog tour!  Each stop not only features something unique for readers, you can also enter to win a copy of the book.

Gregory Funaro grew up in Cranston, Rhode Island, and wrote his first story, The Ghost in the Window, in the fourth grade. He considers this to be his finest work, but unfortunately it has been lost to time. Following high school Greg majored in theatre at the University of New Hampshire, and after various acting gigs, received his AM in Theatre Arts from Brown University and an MFA in Acting from the FSU/Asolo Conservatory. Greg teaches drama at East Carolina University, and is busy working on the next book in the Odditorium series.

The Giveaway
Enter to win a copy of Alistair Grim's ODDITORIUM from Disney Hyperion!
- US residents only
a Rafflecopter giveaway