We are so excited to be apart of the Percy Pack! What does that mean? It means we're looking forward to celebrating the 10th Anniversary of PERCY JACKSON! Each month starting now, through October, we'll be bringing you exciting news, and special features celebrating the 10th anniversary of Percy Jackson! We'll new posts featuring the latest news about Percy Jackson, as well as Rick Riordan's other series. We're big fans of this series, and love how Rick has made reading about Greek Mythology so much fun.

This is the perfect moment to get your friends hooked on the series you love! On June 15th, The Lightning Thief will be discounted to $.99 across all eBook accounts for one full week (6/15-6/22). It also includes a sneak peek chapter excerpt from Magnus Chase and the Gods of Asgard, Book One: The Sword of Summer. 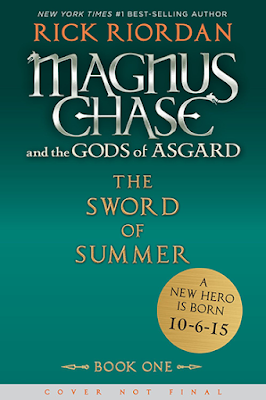 MAGNUS CHASE SNEAK PEEK ON RICKRIORDAN.COM
Catch a sneak peek of Magnus Chase and the Gods of Asgard, Book One: The Sword of Summer available online at ReadRiordan.com! The book will be out on October 6th, 2015.

ABOUT THE BOOK
Magnus Chase has always been a troubled kid. Since his mother’s mysterious death, he’s lived alone on the streets of Boston, surviving by his wits, keeping one step ahead of the police and the truant officers. One day, he’s tracked down by an uncle he’s never met—a man his mother claimed was dangerous. His uncle tells him an impossible secret: Magnus is the son of a Norse god. The Viking myths are true. The gods of Asgard are preparing for war. Trolls, giants, and worse monsters are stirring for doomsday. To prevent Ragnarök, Magnus must search the Nine Worlds for a weapon that has been lost for thousands of years. When an attack by fire giants forces him to choose between his own safety and the lives of hundreds of innocents, Magnus makes a fatal decision. Sometimes, the only way to start a new life is to die.. 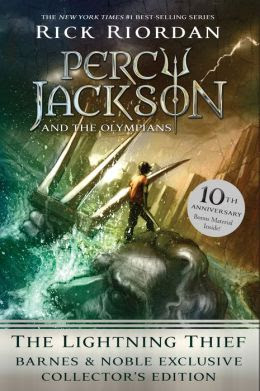 BARNES & NOBLE COLLECTOR’S EDITION
The perfect gift for new and faithful Percy fans: Barnes & Noble offers customers an exclusive Collector's Edition of The Lightning Thief to celebrate the 10th anniversary. This version includes extra content from both author and illustrator as well as a specially designed jacket and endpapers. Purchase here.

ABOUT THE SERIES
Percy Jackson is a good kid, but he can't seem to focus on his schoolwork or control his temper. And lately, being away at boarding school is only getting worse--Percy could have sworn his pre-algebra teacher turned into a monster and tried to kill him. When Percy's mom finds out, she knows it's time that he knew the truth about where he came from, and that he go to the one place he'll be safe. She sends Percy to Camp Half Blood, a summer camp for demigods (on Long Island), where he learns that the father he never knew is Poseidon, God of the Sea. Soon a mystery unfolds and together with his friends--one a satyr and the other the demigod daughter of Athena--Percy sets out on a quest across the United States to reach the gates of the Underworld (located in a recording studio in Hollywood) and prevent a catastrophic war between the gods.

CELEBRATE PERCY'S 10TH ANNIVERSARY with The Lightning Thief, the book that started the internationally best-selling Percy Jackson and the Olympians series. 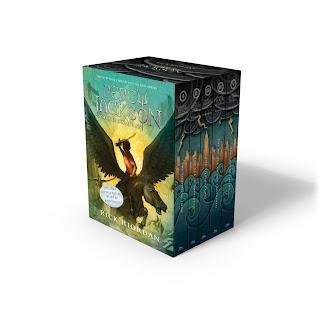 To celebrate the 10th Anniversary, we've got a sweet giveaway! Thank you to Disney Hyperion, 1 winner will receive the complete Percy Jackson and the Olympians box set in paperback form! Open to US addresses only. Prizing provided by Disney-Hyperion. To enter, please fill out the form below: