Hello and welcome today's RED: The True Story of Red Riding Hood, blog tour. I am so excited about this upcoming release! We're big fans of Liesl Shurtliff's, and I love that she's continuing her magic of writing fairytailers with a twist, with the story of Red Riding Hood. After you check out my review below, be sure to enter the giveaway at the end of the post & follow the rest of the tour! 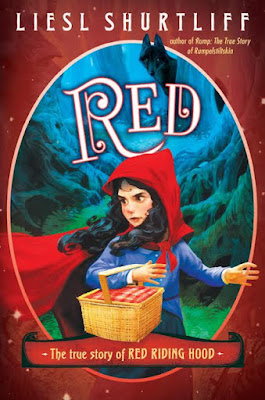 By: Liesl Shurtliff
Published by: Random House Kids
To Be Released on: April 12th, 2016
PreOrder from: Amazon | B&N
Add it  Goodreads
Rating: 4.5 owlets: I Really Enjoyed It!
Source: *I received an arc from the publisher to review, in exchange for my honest review

But when Red’s granny falls ill, it seems that only magic can save her, and fearless Red is forced to confront her one weakness.

With the help of a blond, porridge-sampling nuisance called Goldie, Redgoes on a quest to cure Granny. Her journey takes her through dwarves’ caverns to a haunted well and a beast’s castle. All the while, Red and Goldie are followed by a wolf and a huntsman—two mortal enemies who seek the girls’ help to defeat each other. And one of them just might have the magical solution Red is looking for. . . .

Liesl Shurtliff weaves a spellbinding tale, shining the spotlight on a beloved character from her award-winning debut, Rump.

Red: The True Story of Red Riding Hood is a fabulous fairytale retelling with some exciting twists. When Red's Grandmother gets sick, it's up to Red to go out into the woods in search of the ingredients she needs to get well. While on her way, Red encounters more than just the wolf. Through Red's story, Shurtliff introduces readers to a variety of well known fairytale characters, and places. I loved the way she weaved together other fairytales, and the twist she gave those characters, in Red's story. I especially loved the twist on the wolf! That was one of my favorite parts of this story.

Red is a character readers won't soon forget. In her quest to save her beloved Grandmother, Red takes readers on an unforgettable journey brimming with magic, friendship, and danger. Along the way Red learns to not only overcome her fear of her magic, she learns to trust herself, and her friends. Red has magic, just like her Grandmother. Unlike her Grandmother, Red has a fear of using it, because she never gets the spells right, which has resulted in a few disasters. I loved watching Red learn to trust in herself, and her abilities. Something her Grandmother always knew she could do.

I've always been a fan of Little Red Riding Hood, but I've never really come to love her character like I have with Shurtliff's Red Riding Hood. What a fabulous character to read about. Shurtliff makes reading fairytales cool, no matter how old you are! Fans will know her best for Rump (The True Story of Rumplestiltskin) whom is mentioned in the story, but is not a character you'll see in the story. As well as Jack (Jack The True Story of Jack and the Beanstalk) I love how Shurtliff tied these stories to Red's.

Whether you're a long time fan of Liesl Shurtliff's or this is your first book of hers to read about, I highly recommend picking up this book, as well as her other books! 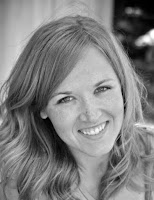 Liesl Shurtliff was born and raised in Salt Lake City, Utah, with the mountains for her playground. Just like Rump, Liesl was shy about her name, growing up. Not only did it rhyme with weasel, she could never find it on any of those personalized key chains in gift shops. But over the years she’s grown to love having an unusual name—and today she wouldn’t change it for the world!

Before she became a writer, Liesl graduated from Brigham Young University with a degree in music, dance, and theater. She now lives in Chicago with her husband and three young children, where she still dreams of the mountains. Rump is her first novel.