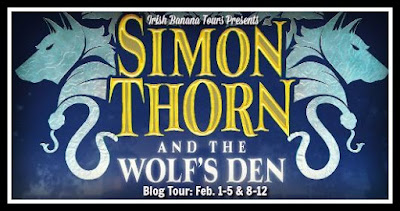 Hello and welcome to today's SIMON THORN blog tour stop! I'm so thrilled to host today's stop, as it's also the release day of Simon Thorn! Aimee Carter's newest release is a fantastic middle grade read! You can read my review below, and don't forget to enter to win!

ABOUT SIMON THORN AND THE WOLF'S DEN 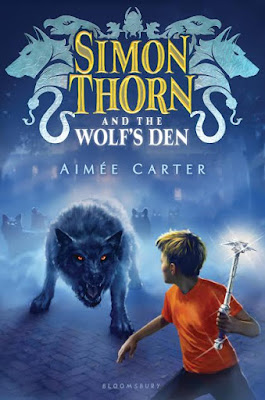 By: Aimee Carter
Published by: Bloomsbury
Released on: February 2nd, 2016 - TODAY
Series: Simon Thorn #1
Purchase from: Amazon | B&N | Indiebound | The Book Depository
Add it to Goodreads
Rating: 5 Owlets - I Loved It!
*Source: I received an arc from the publisher in exchange for my honest review.

A thrilling debut in the tradition of Rick Riordan and Brandon Mull about a boy who discovers a secret race of animal shape shifters.Twelve-year-old Simon Thorn’s life has never been easy or normal, but things like being bullied at school and living in a cramped Manhattan apartment with his Uncle Darrell are nothing compared to his biggest secret: He can talk to animals.But when his mom is suddenly kidnapped by a herd of rats, Simon finds out that he, his mom, and his uncle are all Animalgams—people born with the ability to change into an animal at will.In search of his mom, Simon discovers the Animalgam Academy based at the Central Park Zoo. There he learns about the fractured five kingdoms that make up this secret world . . . and realizes he may be the only one who can save it.This action-packed page-turner is perfect for fans of the Spirit Animals and The School of Good and Evil series.


A fantastic read! Simon Thorn is an action packed page turner that takes readers on an unforgettable adventure with an unlikely hero. If you've ever wish you could have the power to talk to animals, or shape shift into them, you're going to love this book. Aimee Carter has created something magical with Simon Thorn. I love that Simon's adventure takes readers into a magical world that exists among our own world.

Simon Thorn is a character a lot of readers are going to love reading about. He is such an easy character to like. He's a lovable hero who at times can't seem to catch a break. Which is what also makes him a relatable character. He deals with his fair share of bullying. I love that he does stand up for himself, and those who also get bullied along with him. Thankfully he's got a wonderful Uncle who loves, and supports him, and a few good friends to rely on. If dealing with bullying wasn't enough, Simon quick finds himself thrust into a world he knew nothing about. In order to save those who loves, has to figure out how to navigate his way through it. In the process, he not only learns more about his heritage, and who he is, he also he learns to trust those around him. Most importantly he learns to trust himself.

There is so much more to Simon Thorn than anyone realizes, including himself. That is part of what makes getting to go on this action packed journey with him, so much fun. Readers discover the secrets right along side Simon. The plot twists are engaging, and surprising, as are some the characters. Not everyone is who you think they are, and not everyone has Simon's best interest at heart. Thankfully Simon doesn't go about his journey alone. One of the things I loved about this book, was the importance of family and friends. Aside from Simon, his Uncles, and his new found friends were characters I really enjoyed getting to know.

Simon Thorn is an engaging, exciting, and unforgettable read. It's one that will leave you one the edge of your seat while reading it. When you're finished with the last page, you'll be wishing the next book was already in your hands! This is an fantastic read, and though it may be targeted for middle grade readers, it is a book for all ages to read! I've really enjoyed Aimee Carter's young adult books, but I think she's found her niche with middle grade books. I loved this book, and all it offered. 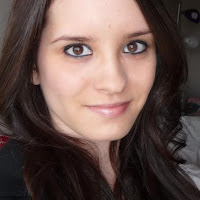 SIMON THORN AND THE WOLF'S DEN (#1 of the Simon Thorn series, Bloomsbury) will be released February 2, 2016.

3 Finished Copies of SIMON THORN
US Only
a Rafflecopter giveaway