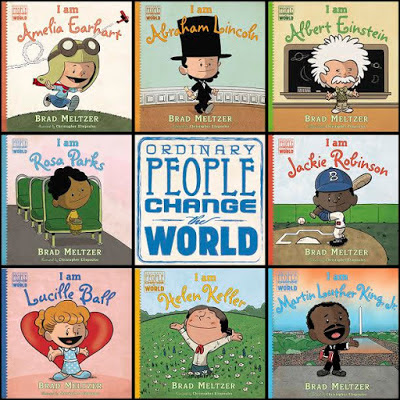 Ordinary People Change The World is a fantastic series for kids. Let me rephrase that, it's great for adults as well. I've enjoyed reading these books along side my children. I'm thrilled to have the chance to spotlight the entire series though out the month of February, here on Mundie Kids. Check out my reviews for other books in the  Ordinary People Change The World series, here. This is such a great series to pick up! You can't go wrong with reading any of these books. Today I'm thrilled to share my review for I Am Abraham Lincoln. A perfect book to pick up on this President's Day. 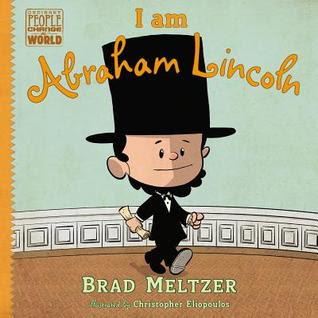 By: Brad Meltzer
Illustrated by: Christopher Eliopoulos
Published by: Dial Books for Young Readers
Released on: January 14th, 2014
Series: Ordinary People Change The World
Purchase from: The Author | The Publisher | Amazon | B&N
Add it to Goodreads
Rating: 5 Owlets - I Loved It
*I received this book from the publisher in exchange for my honest review

We can all be heroes. That’s the inspiring message of this lively, collectible picture book biography series from New York Times bestselling author Brad Meltzer. Kids always search for heroes, so we might as well have a say in it, Brad Meltzer realized, and so he envisioned this friendly, fun approach to biography for his own kids, and for yours. Each book tells the story of one of America’s icons in an entertaining, conversational way that works well for the youngest nonfiction readers, those who aren’t quite ready for the Who Was series. Each book focuses on a particular character trait that made that role model heroic. For example, Abraham Lincoln always spoke up about fairness, and thus he led the country to abolish slavery. This book follows him from childhood to the presidency, including the Civil War and his legendary Gettysburg Address. This engaging series is the perfect way to bring American history to life for young children, and to inspire them to strive and dream.

"Sometimes, the hardest fights don't reveal a winner, but they do reveal character. Especially when you're fighting for something you believe in."

Abraham Lincoln's story is one fantastic read. There are so many powerful messages within it that readers can apply to their own lives. One of the best lessons readers will take out of this book, is that no matter what, Abraham Lincoln always stood up for what he believed in, even if he was the only one to do so. He was never afraid to speak his mind, or what he believed in. He always fought for what was right. He also never gave up. He lost 4 elections before he became President of the United States of America.

Another thing that readers will learn, is that from childhood to being President of the United States of America, Mr Lincoln never shied away from helping those who needed help. He never stopped standing up for what was right, nor did he stop believing in what was right, even if he was the only one. As President, he saw the end of the civil war, and the end of slavery. He gave powerful speeches that, still to this day are quoted by others. One of the most powerful speeches in history was his, and it is only 271 words long. Out of that speech he said, "All men are created equal."

I love that at the end of the book, there are a few historical pictures of Mr. Lincoln, along with one of his quotes. I loved that I also learned something more about Abraham Lincoln while reading this book, and that is he had a love of reading He always read, even when he was younger, and all through out his adult years. What a great book to read to get know more about Abraham Lincoln. This book makes the perfect addition to any home, school, public or classroom libraries. I highly recommend picking it up.

Thank you Penguin Kids, we have an amazing giveaway! To enter, please fill out the form below: