THE DOOR IN THE STAIRCASE by Katherine Marsh / Blog Tour: Excerpt & Giveaway 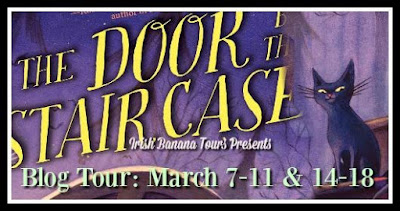 Hello and welcome to today's blog tour stop for Katherine Marsh's THE DOOR IN THE STAIRCASE. Today's stop includes an excerpt from the book, along with a giveaway! First, here's a little bit about the book. 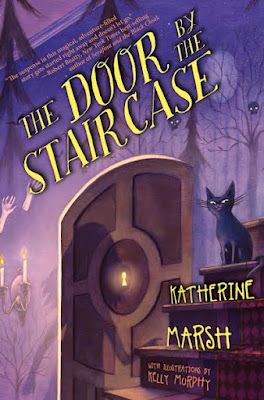 Twelve-year-old Mary Hayes can't stand her orphanage for another night. But when an attempted escape through the stove pipe doesn't go quite as well as she'd hoped, Mary fears she'll be stuck in the Buffalo Asylum for Young Ladies forever. The very next day, a mysterious woman named Madame Z appears at the orphanage requesting to adopt Mary, and the matron's all too happy to get the girl off her hands. Soon, Mary is fed a hearty meal, dressed in a clean, new nightgown and shown to a soft bed with blankets piled high. She can hardly believe she isn't dreaming!But when Mary begins to explore the strange nearby town with the help of her new friend, Jacob, she learns a terrifying secret about Madame Z's true identity. If Mary's not careful, her new home might just turn into a nightmare.


The Household Tales lay inside her shoulder bag, tucked snugly against her. The book was her most cherished possession now that Caleb and her mother were gone. But it was a poor substitute for a family. The acrid smell of soot made her eyes sting. Or was it the memory of her mother, an arm around each of them before bed, calling one her heart, the other her soul? Mary was never quite sure which one she was, only that there was a power in their being three. She murmured her mother’s words—my heart, my soul—but they just made her feel worse. Her forehead slid onto her knees. At least the dark stove seemed the right place to mourn, curled into a fetal ball in its cast-iron belly of ashes.


It was tempting to stay like this forever; but Mary knew it was only a matter of time before Mrs. Boot realized she was missing and went looking for her. So after a few minutes she sat up, wiped away her tears, and began to hunt in the dark, feeling blindly along the crusty sides of the stove until she found what she was looking for—the pipe that led up into the chimney.


The opening of the pipe was narrow and round. She pushed her bag, with her copy of Household Tales, up through the pipe, then stuck in her head. But she had to press the soles of her boots against the sides of the stove to wedge her shoulders through. After an uncomfortably tight squeeze, she popped into the flue. She wriggled all the way out of the pipe and began to shimmy her way up, using her elbows and knees. But as the smell of soot grew stronger, she felt a stab of breathless panic. She had read stories in the newspaper about chimney sweeps, boy apprentices even smaller than she, who had suffocated trying to clean inside the tight flues. Her palms felt sweaty and slick against the brick, and her heart pounded as she imagined a similar fate. The stove would start to smoke and Mrs. Boot would complain that something—a dead animal, perhaps—was blocking the chimney. Eventually, they would find her blackened body. Mary’s breath came in ragged gasps, and she struggled to control her trembling, which for once wasn’t from the cold or the threat of Mrs. Boot’s switch.


But turning back wasn’t an option. For the first four years after the fire, she had lived at an orphanage for younger girls, where she had been kept warm and decently fed in the hope that one of the wealthy couples who sometimes came through would adopt her. But the few girls who were adopted were cheerful and eager to please. Even their straight, tightly braided hair seemed obedient. Mary had wild brown curls and clung to a battered copy of Grimm’s fairy tales—she seemed too bookish, too sly. And here, among the older girls, there was no such hope. No one ever came to adopt. If the girls were lucky enough to survive the cold and the meager portions, Mrs. Boot might find them a job at a textile factory. But Mary wasn’t going to be one of the lucky ones—Mrs. Boot had taken an instant disliking to her. Within weeks of arriving, Mary had realized that her only chance at a better life was to flee, preferably before winter.


Counting silently to distract herself, Mary climbed farther up the flue. Her knees and elbows scraped against the blackened brick as she shoved herself upward. Once, a patch of hardened creosote gave way, and she nearly fell before catching herself by jamming her knees and elbows out to stop her. She was certain she was bleeding, but she dared not look. As the flue narrowed, her shoulder bag wedged against her. Her head began to feel thick and heavy from the smell of soot. How far, she wondered, could the chimney cap be?

Posted by Mundie Kids at 12:01 AM Labels: Blog Tour, Disney Hyperion, Excerpt, GIVEAWAY, Katherine Marsh, The Door In The Staircase