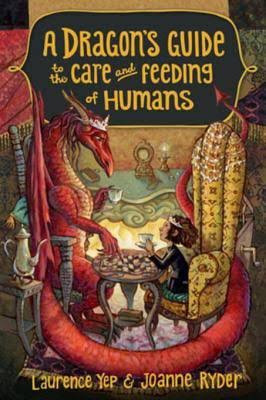 One of the things I have enjoyed being able to do as a book reviewer, is donate countless books to school classrooms, libraries, and children's shelters. One of the books I recently donated was to a friend of mine's second grade classroom. Not long after I donated this book, did she had me back a review written by one of the students in her classroom. I've shared Gavin's reviews, which he wrote in his own words, below. First, here's a little bit about the book.

Unknown to most of its inhabitants, the City by the Bay is home to many mysterious and fantastic creatures, hidden beneath the parks, among the clouds, and even in plain sight. And Winnie wants to draw every new creature she encounters: the good, the bad, and the ugly. But Winnie’s sketchbook is not what it seems. Somehow, her sketchlings have been set loose on the city streets! It will take Winnie and Miss Drake’s combined efforts to put an end to the mayhem . . . before it’s too late.

A Dragon's Guide To The Care and Feeding of Humans is magical, exciting, and a little frightening. I liked this book a lot because it is about magic and magical sketchlings. My favorite part was reading the climax when Miss Drake fights a magic eating sketching called a pembru. In the beginning the story moves slowly, then when you get to the middle the problem starts and gets more exciting. I would change the part when Miss Drake and Winnie are playing checkers, and make it more exciting. It would be more exciting if Mss Drake told the adventures of "Fluffy". I think the genre of this book is fantasy. I think it is fantasy because it has magic and made up characters.