THE KID IN THE RED JACKET by Barbara Park / Book Review 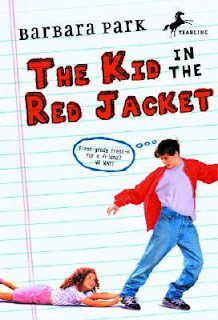 Today I'm thrilled to share another book review, written by our second grade guest reviewer, Gavin G. Today Gavin shares his thoughts on one of Barbara Park's classics, The Kid In The Red Jacket.

The kids in Howard's new town act as if he's totally invisible, except for his six-year-old neighbor, Molly Vera Thompson. True, Howard could use a friend, but an annoying little girl who talks nonstop and looks like a miniature Bozo isn't exactly what he had in mind! Of course, when you're really lonely, you'll be friends with anyone.

Howard is moving to Massachusetts and is scared he will not make any friends. I like the author's writing style because it is funny, a little sad and as some fun names. As I read when Howard get invited to a football game, it made feel excited, because Howard was making some new friends. Like when Molly called Howard, Howard Jeeper, instead of Howard Jeeter. I like it because it is funny and I almost laughed out loud.

Something that surprised me was when Howard started liking Molly, because he did not like for her a long time. I think the genre of this book is realistic fiction, because it could have happened, but did not. I think the author wrote this book to teach that even though you might be older, you can be friends with anyone.