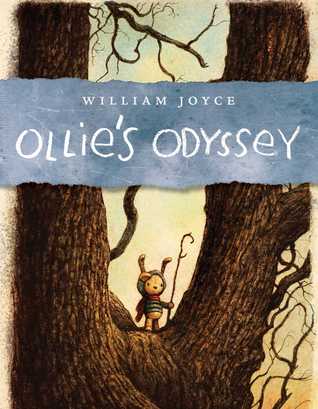 By: William Joyce
Published by: Atheneum (Simon & Schuster)
Released on: April 12th, 2016
Ages: 7-12 years old
Rating: 4 Owlets - We Enjoyed It!
Purchase from: Simon & Schuster | see retailer list
Add it to Goodreads
* I received a copy of this book to review, in exchange for my honest review

From the creator of The Fantastic Flying Books of Mr. Morris Lessmore and The Guardians of Childhood comes an grand adventure of valor, friendship, and a look into the mysterious world of favorite toys.In the secret realm of toys, there are many mysteries.There is the Code of the Toys, which is as ancient as childhood.There’s also the magic of becoming a child’s favorite, the highest honor in the Toy World.Made by hand by Billy’s mother, Ollie is a special toy, “a toy who will matter.” He becomes Billy’s best friend, confidant, pal, and yes, Billy’s “favorite.”But there are villains in the Toy World, and Zozo, the clown king, is the most feared. He and his toy henchman (the Creeps) have sworn to steal and imprison favorite toys until they forget their children and become forever lost.When Ollie is toynapped, Billy must rescue his beloved favorite from Zozo’s subterranean lair in the old Carnival Place, past the park, through the woods, and into the night.Never has a journey of ten blocks been more epic.

This is a story about Billie, a boy who loves his special, ratted old toy. It's also a story about Ollie, a ratted old, special toy who loves his boy. Ollie has always been there for Billie to comfort him, and has joined him on every grand adventure he's ever been on. Soon, Billie and Ollie won't have as many adventures together. Billie is growing up, and soon Ollie won't be his constant companion. When Ollie goes missing one night, Billie stops at nothing to rescue his beloved toy.

I love the way Joyce captures that innocence of childhood. He captures the wonder, the magic, adventure, and all the fun childhood is. At the same time, he doesn't shy away from the things that taint it. This adventure is one about growing up, and never forgetting, as much as it is about good, vs evil. True to Joyce's style, this is a story about friendship and a grand adventure. It's about bravery, and courage. It's also a story about remembering the forgotten parts of childhood, and the things that make it special.

An epic adventure! Joyce has a way of creating stories that capture his reader's heart, imagination, and attention. With vivid imaginary, and characters we loved reading about, this was a story my daughter and I enjoyed reading together. It's written so that both children and parents alike can enjoy it, and each for different reasons. It's a story that made me want to cherish my children's childhood even more so, and had me longing for the one I long ago left behind.

Ollie's Odyssey is a story about the innocence of childhood, growing up, being courageous, and always remembering. Reminiscent of childhood stories like Peter Pan, The Velveteen Rabbit, and The Little Prince, this is a story that will resonate with adults and children alike. Like Billie, no matter how old we get, and how far away our childhood may seem, there's always a part of it that will always be remembered. It might be a faint memory, but it's a memory all the same.