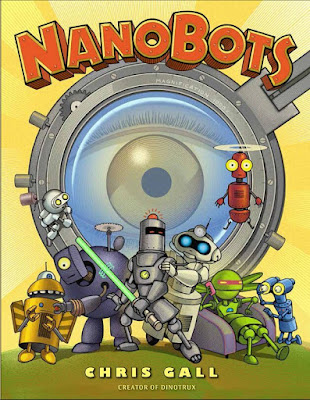 Hello and welcome to today's exciting blog tour post. I am so thrilled to have the creator of DINOTRUX, Chris Gall on the blog today! Fans of Chris's DinOTrux series will love his new book coming out this August, NANOBOTS. Before I tell you a little bit about that book, Chris is here to introduce us to his DinoTrux characters. 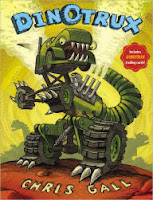 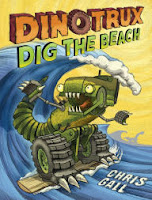 It isn’t easy to create a brand new species. The Dinotrux were born from my imagination, to be sure, but they each needed a lot of thought (and drawing!) to be brought to life.

I had my basic story down on paper. Before I set off to create my different truck/dinosaur hybrids, I decided to do lots of research first. I couldn’t possibly be aware of all the various truck types in the world, and I didn’t know every dinosaur either. I was looking for physical similarities between certain trucks and certain dinosaurs. An early character of mine was Craneosaurus. I had been studying crane trucks and I couldn’t help but think that they seemed to have really long necks like a Brontosaurus (yes, as of 2015, the Brontosaurus is back). Even better, the cable and hook that spooled out of the head made a perfect tongue. What a perfect way to snare a tasty pterodactyl! Dozeratops was next. The big blade on a bulldozer reminded me of Triceratops. And since bulldozers love to push heavy things out of the way, I had a perfect rough-and-tough skill for him. 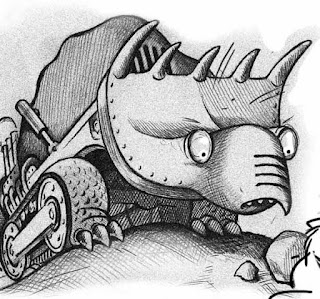 I knew I wanted a bad guy, or at least a scary one. I needed a T. Rex. At first I couldn’t think of what kind of truck my character would be. It needed to be big, loud, rambunctious, and a little menacing. Of course! A monster truck would be the perfect combination with a T. Rex, so my star character was born—Tyrannosaurus Trux. 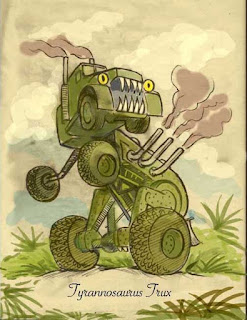 One of my biggest questions was “ what do each of them do?” I wanted each character to have some sort of childlike flaw, or behavior that would make them unique to one another. These behaviors, for the most part, came from the truck side. Since each truck has a job that they are principally known for, I started with that. The garbage truck ingests garbage—so his counterpart, Garbageadon, became a Dinotrux with insatiable hunger. The dump truck dumps rocks and dirt—so Dumplodocus became a litterbug. Semi trucks always seem to travel in groups on the highway, so I created a Semisaur stampede. And when my attention turned to the cement truck, and I pictured all that cement coming out of its rear end, I knew I had Cementosaurus, the un-potty-trained pooper. It was too good to be true.

Next, I started to do some drawing. I needed to actually create what they looked like. This was the fun part, since I had the freedom to invent a whole to type of creature. I had to figure out how their wheels/legs would move. I had to imagine how their mouths would open and close. It was all great fun.

Ultimately, it was important that my characters have child-like behaviors that a young reader could identify with. The Dinotrux were designed to be the more primitive ancestors of their corresponding modern trucks. So naturally, they needed to be a work in progress, like a child.


*  *  *  *  *
Thank you Chris for stopping by Mundie Kids today! Find out more about the DINOTRUX series here, including where to purchase the books from. 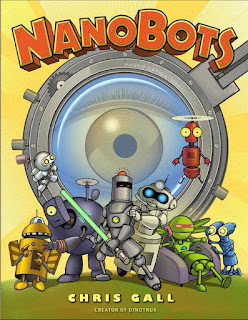 Introducing a team of robots powerful enough to change the world--and yet smaller than the dot at the end of this sentence!
A boy inventor creates the ultimate in high-tech superheroes that could one day save the world--but they have some smaller problems to take on first! NanoBots are tiny. They're almost too small to see, but they can each do a unique and important job: Medibot makes sure their Inventor never catches a cold.... Chewbots gobble up that gum the Inventor trampled into the carpet... Binobot scans the scene of a crime for clues the Inventor could never see... and Seekerbots explore to meet microscopic new creatures. These bots and their high-tech friends sure make the inventor's life easier, but when the most AWESOME robot in town is in real trouble, they must band together and prove that sometimes the SMALLEST helpers can be the BIGGEST heroes! Includes fun facts about real nanotechnology in the backwater.

* NanoBots will be released on August 23rd from Little Brown. Find out more about the book here, and here.

Chris Gall has been drawing pictures for as long as he can remember. When he was caught doodling on his desk in second grade, his teacher suggested that he might become an artist some day, then made him clean all the desks in the classroom. In seventh grade, Chris won a Read Magazine Young Writers Award, and that inspired him to create stories to go with his art. After graduating from the University of Arizona, Chris became an award-winning, internationally recognized illustrator, and his artwork has been shown in almost every publication in America, including Time, Newsweek, People, Fortune, The New York Times, and The Washington Post.
In 2004, his first picture book, America the Beautiful, became a Publishers Weekly Best Children’s Book of the Year, and his career in children’s publishing began. Since then he has authored and illustrated six more books, including the acclaimed Dinotrux, a 2009 Publishers Weekly Best Children’s book; Revenge of the Dinotrux; Awesome Dawson; Substitute Creacher; Dear Fish; and There’s Nothing to Do on Mars.

Chris has also worked as an adjunct professor of art at the University of Arizona and spent four years as a professional stand-up comedian. He currently lives in Tucson, Arizona, where in his spare time he loves to restore classic cars and fly planes. (source)
Posted by Mundie Kids at 7:26 AM Labels: Blog Tour, Chris Gall, DinoTrux, Guest Post, Little Brown Kids, NanoBots