Just Like My Papa by Toni Buzzeo / Book Review 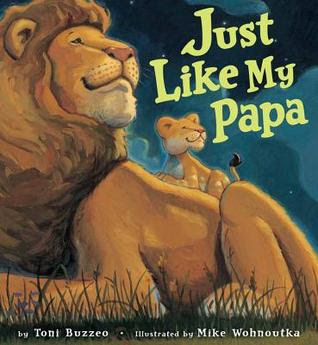 By: Toni Buzzeo
Illustrated by: Mike Wohnoutka
Published by: Disney Hyperion
Released on: April 2nd, 2013
Purchase from: Amazon | B&N
Add it to Goodreads
Rating: 4 Owlets - We Enjoyed It
I received this book from the publisher, in exchange for my honest review

Kito wants to be just like his papa, the protector of the pride. Throughout a day and night on the savanna, the cub imitates the way his father roars, swings his tail, shakes his head, and pounces. Kito may be too little to catch a wildebeest, but he is brave enough to succeed in his own hunt. Someday he will be King, just like Papa.

With its rhythmic text, dramatic moments on the African plain, and playful times for cub and papa, this book will make a perfect read-aloud for family sharing.

Just Like My Papa is a story about a young lion cub named Kito, who wants to be just like his dad, the brave lion king of his pride. He wants to do everything his dad does, and tries his hardest to do just that, because one day he'll grow up and be like him. With cute illustrations and an easy to read, engaging text, this book makes the perfect story for any reading time / read out loud for toddler through kindergarten age children. Fans of the Lion King will enjoy this story, as will fans of animals. Toni Buzzeo does a great job at effortless teaching readers about lions as she tells Kito's story. Also included at the back of the book is a brief explantation about lions, and the dynamics of a lion pride.