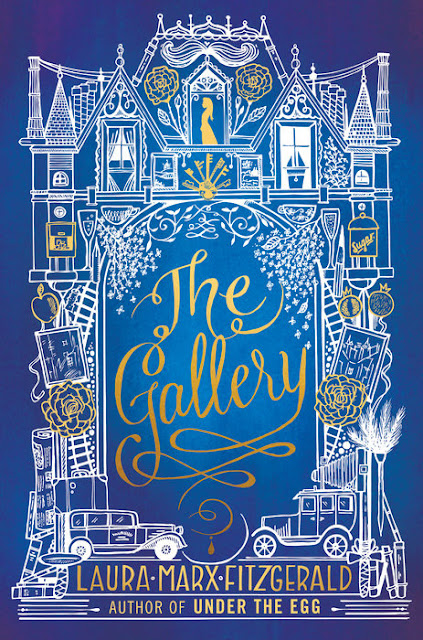 Fans of Laura Marx Fitzgerald are going to love her new release, THE GALLERY!  Today on Mundie Moms, we were the next stop on Penguin/Random House's blog tour for The Gallery, and featured Laura on the blog. Being that her newest release is a middle grade book, I also wanted to featured the guest post stop here on Mundie Kids. The great thing about The Gallery, is that this book is one both MG and YA readers alike, can enjoy. Copied from the Mundie Moms blog tour post, below you'll find Laura's Guest Post, as well as information about her book.

Please choose a piece of art featured in The Gallery and share why you chose to include the piece in the story. Does this piece have personal meaning to you?

Laura Marx Fitzgerald’s latest middle-grade novel features eight pieces of art, each of which contains a clue that assists the protagonist in solving the mystery surrounding a wealthy family in the Roaring Twenties.

Below she describes how she discovered one of these paintings.

Right after college, I went and studied art history in England for two years. Right before I headed home for the holidays. a friend called and said his friend’s family was going to the Christmas concert at Royal Albert Hall, but had an extra ticket. Might I like to join them? (Yes, he said it like that, he was British.)

I was (and am) always up to a free ticket somewhere, so obviously I said yes.

Afterwards I thanked the friend of a friend’s dad profusely and, by way of conversation, he asked me what I was studying. I told him art history.

“Have you been to the Tate yet?” That’s the museum of British art in London.

Which was how I discovered that this guy was a member of the Tate’s Board of Directors, who had the right to stroll into the museum anytime he liked, with guests.

We drove up to the back door. With a few words to the security guard, we were all ushered inside. The guard flipped on the lights. And I had 30 minutes with some of the most famous works of British art on earth: Turners, Constables, Blakes, Whistlers. And one very special Rossetti.

If you think this beauty is beckoning you now, imagine seeing her in the middle of the night, alone in a gallery.

That moment has stayed with me for two decades. And when I decided to write The Gallery, I knew that this painting – the one that lures Martha into the central mystery – would be the one that would lure the reader in, too.

By: Laura Marx Fitzgerald
Published by: Dial Books
Released on: June 14th, 2016
Purchase from: The Publisher | Amazon | B&N
Add it to Goodreads

In her follow-up to the acclaimed Under the Egg, Laura Marx Fitzgerald has fashioned yet another riveting art history mystery in THE GALLERY, this time set in the Roaring Twenties.

When twelve-year-old Martha’s troublemaking ways cause her to get kicked out of school, she has no choice but to join her mother and work in the kitchen for the wealthy Sewell family. Everyone says that heiress Rose Sewell is crazy, and Martha agrees—until she realizes that Rose, an eccentric who refuses to leave her room, may be trying to communicate with the outside world through the paintings she sends down to the main floor of the house. If Martha's right, then Rose isn't a hermit—she's being kept prisoner in her own home. But by whom...and why?