We're a week away from the release of THE BRONZE KEY by Cassandra Clare & Holly Black! This is the next installment in their THE MAGISTERIUM SERIES. 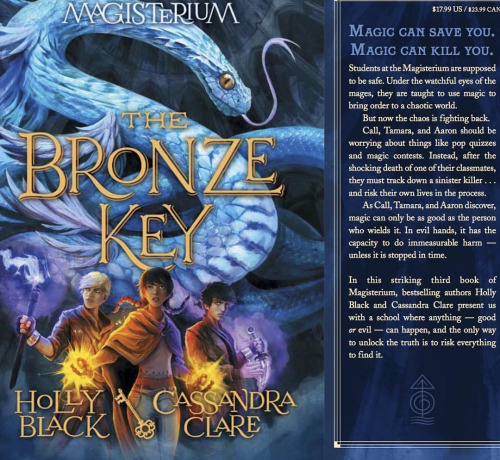 Check out both the US cover (above) and the UK cover (below). 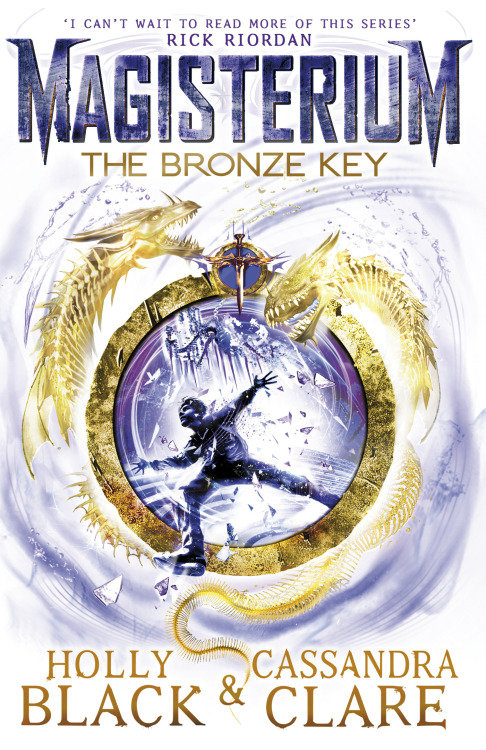 To celebrate the book's upcoming release, Cassie and Holly both shared this snippet from the book, THE BRONZE KEY, which was originally shared here.

Magisterium — The Bronze Key!
comes out in ONE WEEK! A celebratory snippet from TBK:
* * *
“As a proof of how sincerely I am sorry, I could give you some of my best romantic tips,” Jasper offered.

Call, who’d been about to perch on one of the arms of the sofa, started laughing so hard that he fell. He hit his bad leg against the floor – which hurt – but not enough to keep him from howling with mirth.

Tamara was smiling, but clearly trying not to. Her lips kept twitching up and down at the corners.

“Are you okay?” Aaron asked, leaning over to help Call up.

“Yes!” Call managed to say before he started laughing again. He flopped onto the couch on Aaron’s other side, still wheezing. “Fine! I’m fine!”

“Number one,” Jasper said, with a frown at Call, who clearly didn’t appreciate the wisdom that was about to be dispensed, “when you talk to a girl, you have to look her right in the eye. And you can’t blink. That’s very important.”

“Not if you do it right,” Jasper replied significantly. Call wondered what that meant. Were you supposed to develop a second eyelid, like a lizard?

“Tip Two,” Jasper went on, “is to nod at everything she says, and laugh a lot.”

“Laugh at her?” said Tamara, dubiously.

“Like she’s hilarious,” said Jasper. “Girls like to think they’re charming you. Tip Three: smolder at her.”

Jasper straightened up, tossing his hair back. He lowered his eyelashes and stared directly at the three of them, his mouth turned down in a grim scowl.

Jasper squinted even harder, closing one of his eyes and staring meaningfully out of the other.

“It works on Celia,” said Jasper. “She melts when I do that.”

Jasper rolled his eyes. “Tip Four is to have the right haircut, but that’s obviously hopeless for both of you.”

“There’s nothing wrong with my hair!” said Aaron.

“It’s all right,” said Jasper. “Call’s looks like he cut it with a sharp rock.”

“Is there a Tip Five?” asked Tamara.

All My Treasures: A Book of Joy by Jo Witek / Book Review 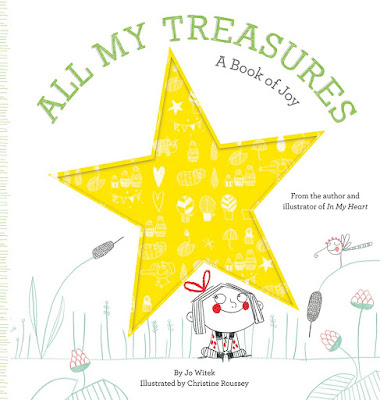 By: Jo Witek
Illustrated by: Christine Roussey
Published by: Abrams Kids
Released on: August 23rd, 2016 - Out TODAY!
Ages: 2-4
Purchase from: Amazon | B&N
Add it to Goodreads
Rating: 3 Owlets - It's A Good Read
* I received a copy of this book to review from the publisher, in exchange for my honest review

When a girl receives a beautiful porcelain box from her grandmother, she immediately wants something special to put inside it. But what could it be? What does she love best? She loves jumping in puddles on rainy days, blowing bubbles in the park, and watching her little sister’s first steps. As it turns out, life’s most precious treasures cannot be contained in a box! With a gentle message about the immateriality of happiness, this story reminds us to take pleasure in everyday moments. The book is beautifully packaged with a sparkly die-cut star on the cover, and flaps throughout reveal hidden surprises.

The best treasures are things you can't buy, but the experiences and moments we have with family and friends, and sometimes by ourselves.

All My Treasures is a cute story about a young girl who wants to fill a special box up that her Grandmother gave her, with special treasures. Each of her treasures are moments / things she loves doing with her family, friends, and even by herself. With it's easy to understand and relatable story, simple illustrations and primary colors, this book is one even the youngest readers will enjoy interacting with. They'll also enjoy finding hidden treasures under the lift the flaps, found on each page.

On a side note, *the pages are studier than most picture books, but the flaps are still ones that could easily be torn by young readers.