Welcome to the first stop in the IRON MAN: THE GAUNTLET, blog tour! I am so thrilled to celebrate Eoin Colfer's upcoming release. Today's stop features my review and a giveaway! Trust me, if you're a fan of IRON MAN, you'll want to pick up this book. 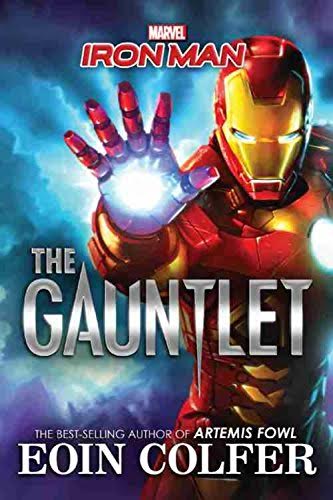 By: Eoin Colfer
Published by: Marvel Press
To Released on: 10/25/16
Ages: 8 & up
Purchase from: Amazon | B&N
Add it to Goodreads
Rating: 4.5 stars - We Really Enjoyed It!
*I received an arc of this book from the publisher at BEA, in exchange for my honest review

Tony Stark is known throughout the world as many things: billionaire, inventor, Avenger. But mainly for being the Invincible Iron Man.

Just when Tony is about to add his pizzazz to an international eco-summit in Ireland, someone close to him forces him to question his role in making the world a more dangerous place with his high-tech weaponry. But Stark doesn't have much time to reflect before an old enemy presents him with an even greater challenge: the assassination of all the eco-ministers, and Iron Man himself. Just how invincible Iron Man is when he is stripped of everything remains to be seen in this breathless adventure by the bestselling author of Artemis Fowl.

Marvel fans of all ages will love reading Eoin Colfer's THE GAUNTLET. Written true to the iconic Iron Man, Colfer effortlessly brings the snark, the ego, and the brains of Tony Stark to life within the pages of his new middle grade book.

There's no shortage of danger, action, snark, or trouble for that matter, in this book. What fans love about Marvel's Iron Man, spring to life within the pages of this book. It is incredibly easy to mentally picture everything that is going on, while reading the book. It's like reading an Iron Man movie in book form.

I really enjoyed the over all story arc for this book. Readers will see Tony Stark's struggle to be accepted by his father as a young boy, to the man he becomes, what drove me to become Iron Man, to seeing him fix the errors of his thinking, and his creations. I've always been a fan of Iron Man, (though I may like Captain America a little bit more in the movies), and I really loved the Iron Man I got to know in this book.

While this book is about the fan favorite Iron Man character, this story is a whole new story for young Marvel fans to enjoy! This is a fantastic book for Marvel fans of ALL ages to enjoy. I don't think anyone could have written this book better than Eoin Colfer. I'm hoping we'll get more Iron Man books from Colfer! This one is definitely worth picking up! 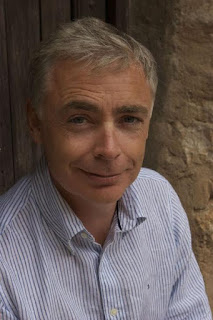 Eoin Colfer (pronounced Owen) was born in Wexford on the South-East coast of Ireland in 1965, where he and his four brothers were brought up by his father and mother, who were both educators.

He received his degree from Dublin University and began teaching primary school in Wexford. He has lived and worked all over the world, including Saudi Arabia, Tunisia and Italy. After the publication of the Artemis Fowl novels, Eoin retired from teaching and now writes full time. He lives in Ireland with his wife and two children.

Enter to win 1 of 3 Finished Copies of THE GAUNTLET, that are being giveaway during the blog tour! US Only