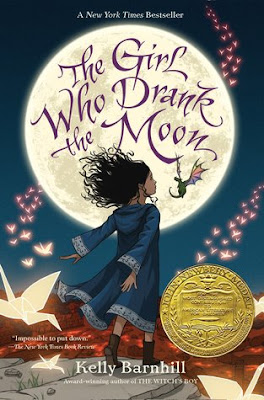 Winner of the 2017 Newbery Medal
The New York Times Bestseller

An Entertainment Weekly Best Middle Grade Book of 2016
A New York Public Library Best Book of 2016
A Chicago Public Library Best Book of 2016
An Amazon Top 20 Best Book of 2016
A Publishers Weekly Best Book of 2016
A School Library Journal Best Book of 2016
Named to KirkusReviews’ Best Books of 2016
2017 Booklist Youth Editors’ Choice
Every year, the people of the Protectorate leave a baby as an offering to the witch who lives in the forest. They hope this sacrifice will keep her from terrorizing their town. But the witch in the Forest, Xan, is kind. She shares her home with a wise Swamp Monster and a Perfectly Tiny Dragon. Xan rescues the children and delivers them to welcoming families on the other side of the forest, nourishing the babies with starlight on the journey.One year, Xan accidentally feeds a baby moonlight instead of starlight, filling the ordinary child with extraordinary magic. Xan decides she must raise this girl, whom she calls Luna, as her own. As Luna’s thirteenth birthday approaches, her magic begins to emerge--with dangerous consequences. Meanwhile, a young man from the Protectorate is determined to free his people by killing the witch. Deadly birds with uncertain intentions flock nearby. A volcano, quiet for centuries, rumbles just beneath the earth’s surface. And the woman with the Tiger’s heart is on the prowl . . .The Newbery Medal winner from the author of the highly acclaimed novel The Witch’s Boy.
SaveSave


This story took me completely by surprise. I'm not sure what I was expecting maybe a less of a whimsical fantasy, but what I read reminded me so much of Victoria Schwab's first book, The Near Witch. It had an almost Neil Gaimain-like twist on a dark fairy tale environment. I wasn't expecting the depth of world-building or the bittersweetness of the storytelling. And as yes, I enjoyed every page of this surprising story.

First, let me just say -- THERE ARE DRAGONS. Okay, a perfectly tiny dragon. And a witch in the forest, who rescues babies that are left there because of an arcane ritual. The reason behind this ritual twists all around the story and you do find out the whys and hows it developed, but talking about it would be such a huge spoiler that I won't mention it further.

The most beautiful part was the story of Xan and Luna. The way their relationship develops into a grandmother and child relationship that is tinged with an inevitable sadness. It made me think of my own grandmother and how she passed on her bits of wisdom through stories that were sometimes fantastical and sometimes hilarious, but always had a point to them.

The folklore feeling to the world is one that is described in such lyrical terms that you will find yourself easily lost in the phrasing and word choices. The characters, too, while recognizable, will surprise you with a few well placed twists in their character arcs. There were moments in the plot that seemed to lose a little momentum, but the tension was always there, and it stretched easily through the conclusion. My curiosity simply wouldn't let me be as I more questions popped into my head as the story progressed. I think that every well-told story has that same trait.

The audiobook narrator was well chosen. She had a lovely, almost grandmotherly tone that suited the story so well. The narrator, Christina Moore,  also narrates a number of mysteries as well as the Beverly Cleary collection. She was well cast and acted out the characters beautifully.

If you have a midde-grader who enjoys fantasy settings and a story that has echoes of classic fairy tales, you must read The Girl Who Drank the Moon with them. This is one story that should make all the Summer Reading Lists.