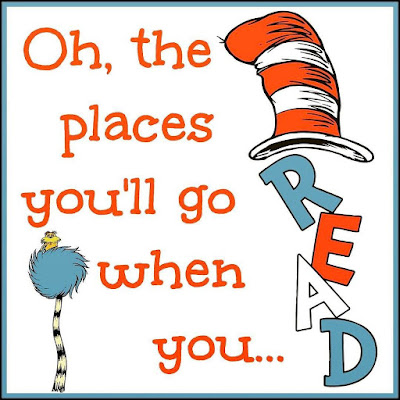 Today is READ ACROSS AMERICA DAY, which is also Dr. Seuss Day. Dr. Seuss would have been 113 today. His amazing legacy lives on within the pages of his books that have been read for generations.

Celebrate his birthday and read across America day, by picking up a book. Read for your own enjoyment, or read to a child. Celebrate the power of reading. Learn more about Read Across America Day, here, and Dr. Seuss Day, here.

Hello and welcome to today's stop for THE ADVENTURES OF SHERLOCK BONE. I'm thrilled to share an excerpt, host a giveaway, and tell you about this brand new series by Lauren Baratz-Logsted. First, read an excerpt from this newly series, below:
READ AN EXCERPT


Opening one eye, I saw a dog before me. But not just any dog. This dog was sitting back on hind legs and, if I had to guess, I’d say it was a Great Dane wearing a deerstalker hat. Odd choice, I thought about the hat, closing my eye again. I wasn’t the slightest bit scared. In my experience, if I don’t bother other creatures, they don’t bother me. I figured if I just ignored it, it would go away.
But no.
“Dr. Catson, I presume?” the dog said.
This time, I opened both eyes.
“Who wants to know?” I asked warily.
“I am Sherlock Bones,” the dog informed me.
That name sounded disturbingly familiar.
“I believe,” the dog went on, “Our Mutual Friend said I would be stopping by?”
It took me a while to piece together what he was telling me. Yes, it had only been one day since Paul had come to call. But you must realize, I’d napped at least a dozen separate times since then. So for me, it felt like ages ago.
And then it hit me. Who this was. What this was about.
“He never said you were a dog!” I cried, outraged.
“And he never said you were a cat,” the dog said. “But since he is one himself, I deduced that you were likely one as well.”
“I told him,” I said, “that I don’t want a housemate.”
“Yes, I believe he may have mentioned that small fact. But never mind that now, though, because...” And here, his eyes grew wide in excitement as he raised a paw in the air as though pointing at the sky. “The game’s afoot!”
“Which one?” I yawned.
“Pardon?”
“Well, you have four feet, don’t you? So I want to know: Which foot are we talking about?”
“That’s not what I meant!”
“Then why on earth did you say it?”
I might have been wrong, but it did seem to me that the dog was starting to look annoyed.
“What I meant was,” the dog said, a gleam of excitement filling his eyes again, “a crime has been committed!”

ABOUT THE ADVENTURES OF SHERLOCK BONES: DOGGONE 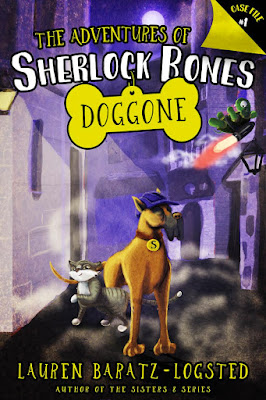 The Adventures of Sherlock Bones turns snooping on its floppy ear when one day, Dr. Jane Catson, a surgeon injured in the Cat Wars has an afternoon nap interrupted by a most unusual occurrence.

On the front lawn of her home, rather loud footsteps disturb her peace as Sherlock Bones, a Great Dane in a deerstalker claiming to be the greatest detective in the world arrives.

After a quick critical examination of the intrusive dog whose enormous body blocks the entire sun from view, Catson has her doubts. But that’s not all. The monstrously-sized creature makes an even more astonishing claim. He has come to live with her!

Before Catson can collect her thoughts into an intelligent rebuttal, Sherlock Bones has made himself quite at home, inventing things like a jetpack for her Castilian housekeeper-cook, a turtle named Mr. Javier and placing his gigantic food and water dishes next to hers.

But there’s no time for protest. The great detective and Dr. Catson have caught themselves their first case: A suspiciously dead human in a nearby abandoned building. Can Sherlock Bones and Dr. Catson crack the case before the killer strikes again? Or will their differences get in the way of solving Case File No. 1? One thing’s for sure, that would be a doggone shame.

ABOUT THE ADVENTURES OF SHERLOCK BONES: DOG NOT GONE 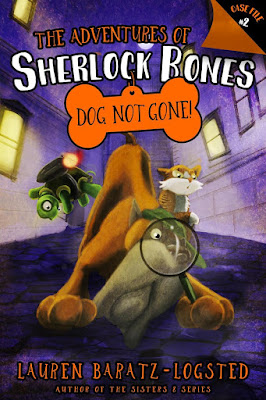 After being introduced to Sherlock Bones, the Greatest Detective in the World, in Case File #1: Dogged to Death, Dr. Jane Catson - surgeon and veteran of the Cat Wars - is back to share an all-new mystery adventure with readers. Despite all of Jane's resistance, Bones is now living with her and her housekeeper/chef, the turtle with a jetpack, Mr. Javier. This time out, the mismatched duo's investigations lead them to a case involving murder, of course, and - wait for it! - Utah. If there's one thing readers can be certain of it's that in this world, the animals are always smarter than the humans. Also, did we mention...Utah? 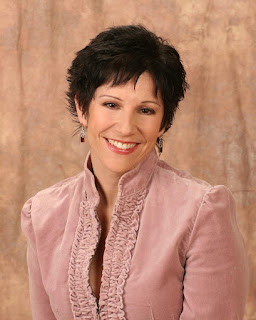 Lauren Baratz-Logsted is the author of over 25 books for adults, teens and kids, including The Sisters 8 series for young readers which she created with her husband and daughter. She lives in Danbury, CT, with that husband and daughter as well as their marvelous cat, Yoyo. 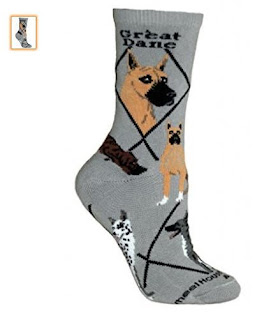 (1) winner will receive a pair of Great Dane Socks (pictured below) and a Bag of Wellness Brand Dor or Cat treats, US Only.
a Rafflecopter giveaway