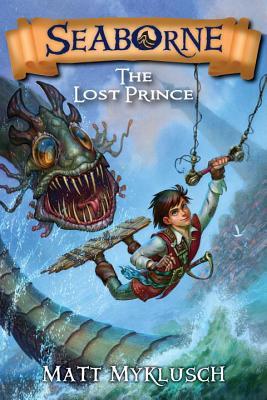 By: Matt Myklusch
Published by: Egmont USA
Released on: April 14th, 2015
Series: Seaborne #1
Purchase from: Amazon | B&N
Add it to Goodreads
Rating: 4.5 Owlets
A copy of this book was provided by the author in exchange for my honest review

Middle-grade adventure readers will love this fresh take on classic pirate tropes. Fans of Percy Jackson and The Chronicles of Egg will enjoy Dean Seaborne's adventures on the sea.

Dean Seaborne is thrown off his ship by the Pirate King and given one last chance to redeem himself before he meets Davy Jones's locker. He has to spy on the Pirate King's biggest rival, Gentleman Jim Harper, and find the treasure hidden on the mysterious island of Zenhala.

An unforgettable adventure on the high seas. Packed with humor, some danger, action, and a 13 year old hero you won't soon forget. This is the perfect beginning for a series you'll definitely want to read.
Dean Seaborne isn't your typical 13 year old boy. Cast into the pirate life, Dean wants out. Gaining his freedom won't be an easy task. He's forced to become a spy for the dreaded Pirate King, Davy Jones. Which is no easy task. Luckily Dean is a lot wittier than the Pirate King gives him credit for. Oh, and he just may be the Lost Prince.....
With a cast of unforgettable characters, many you can't help but root for, pirates, pirate treasure, sunken ships, some action scenes, the right amount of humor, and a little bit of danger, makes for a book you'll definitely want to pick up and read. Did I mention there are sea monsters?!

The Lost Prince is a fast paced, exciting read that hooks you from the moment you start reading it. It's a book I think even the more reluctant readers will enjoy. There's plenty of appeal for both boys and girls. I love the way this book was written. The world building is awesome. It's so easy to visualize the high seas, the places Dean goes, and the various ships he's on.

This was one exciting adventure on the high seas, and I'm looking forward to reading Dean's next adventure. This is one book I'd recommend picking up! Look for the sequel to be out on 4/1/17!
Posted by Mundie Kids at 6:55 AM Labels: 2017 Book Review, 4.5 stars, Book Review, EgmontUSA, Matt Myklusch, Seaborne, The Lost Prince