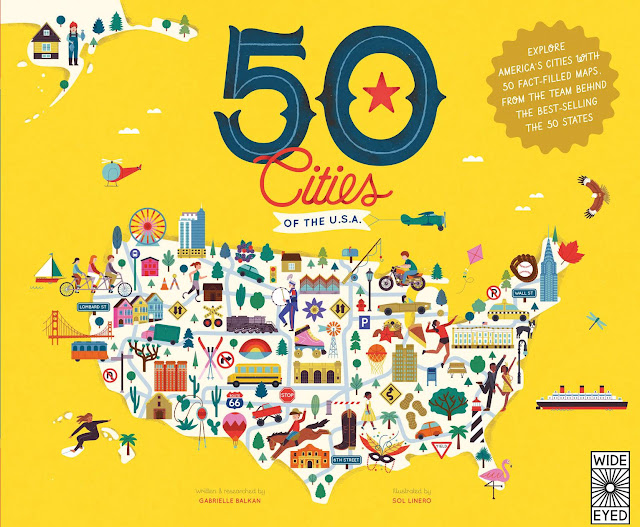 It's that time of year, where you don't want to believe that summer is about half over, and the new school year is just around the corner. I don't know about you, but when my kids were younger, I loved getting them a variety of educational books to read through out the summer. We still do this, but when they were younger there were a lot more fun books to pick from. One of their favorite books were ones about the US, and the world.

Coming this September (9/7/17), from Quarto Publishing, 50 Cities of the U.S.A by Gabrielle Balkan, is one of those fun, educational books that's great for both the home, and classroom libraries. I'm so thrilled that one of the cities featured is my current city, AUSTIN, TX!

Here's a few fun facts about Austin, TX, that you'll find featured in the book:

Austin applauds the past and current contributions of American Indians with dancing by tribes such as the Comanche Nation.
Amy's Ice Cream "Scoops" (aka servers) toss and juggle blackberry, lime, and coconut ice cream at an annual Trick Olympics.
ACL celebrates Texas standards like Tejano music, progressive country, and western swing, whose lineup often includes a steel guitar.
Fed by a cool underground spring, this 3-acre pool is an ideal spot—for overheated swimmers and the endangered Barton Springs Salamander!
Contemporary sculptures, like John Grade's Canopy Tower, mix with the woodlands and waterfront of the historic Laguna Gloria.

The pointy toe of the state footwear is designed to fit easily into the stirrup when riding horseback.
Dell Children's hosts pet therapy for patients; studies show that stroking or talking to a pet can lower heart rate and reduce anxiety.
Meet the black-footed ferret, whose slender body lets it to crawl into the holes of its prey—the prairie dog.
Even with helmets and lots of padding, players suffer brutal injuries in this high-contact sport.
This started with a few hubcaps tethered to a fence and now includes 60 tons of donated bikes, clocks, and odd toys.
This is home to some 1.5 million migrating bats, who have four fingers and a thumb, just like us!
This library includes a replica of the Oval Office at 7/8th scale, including the three TVs he used to keep up with the news.

SXSW conference invites creative people to share ideas about music, technology, and film, and injects some $315 million into local economy.
The Tower here lights up in all orange to celebrate academic honors and athletic victories.
This is the U.S.'s longest running kite festival. During the Civil War, kites were used to delivering letters and newspapers.
The first corn tortilla dates back some 10,000 years and is made by curing maize in limewater.
Austin houses oodles of gaming production companies that hire analysts, artists, engineers, and designers.
Started here with only 19 employees in 1980, this now-massive natural grocery store chain encourages shoppers to use reusable bags.
Find tributes to this favorite Texan musician all over his home town, including a statue, street name, and a 60" x 20" mural.

This is a great list, and hopefully it will get you excited for a visit to the capital of Texas. To add to this great list, here's a few more things I love about Austin:

The Austin area has a number of natural swimming areas, amazing Tex-Mex & BBQ, awesome food trailers, a variety of sports teams, and so much more. If you love the out doors, check out Lady Bird Lake for kayaking, hiking, running, biking, canoeing, and more. Or, visit a number of hiking / walking trails around the area. No matter what you enjoy, Austin, TX is a place I highly recommend visiting.

Here's a list of all the cities featured in this book:

You can learn about Austin, TX, along with 49 other cities, when you pick up your copy on September 7th, when it's out. More information, and to purchase your own copy, please visit Quarto Publishing, here.