THE ADVENTURER'S GUIDE TO DRAGONS (and Why They Keep Biting Me) by Wade Albert White / Blog Tour: Book Review & Giveaway

Welcome to the next stop in THE ADVENTURER'S GUIDE TO DRAGONS blog tour. I'm thrilled to share my review for Wade's newest book in a must read series full of humor, adventure and friendship. Find out more about the book below and don't forget to enter to win! 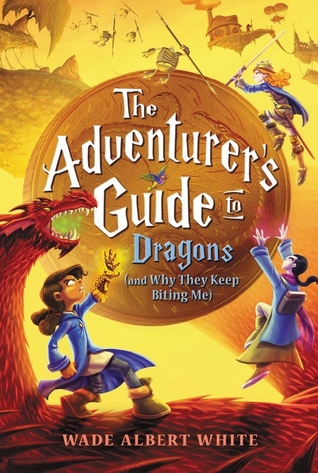 By: Wade Albert White
Published by:  Little, Brown Books for Young Readers
Released on: September 5, 2017
Series: The Adventurer's Guide #2
Ages: 8 & up
Purchase from: Amazon, B&N, iBooks, TBD
Add it to Goodreads
Rating: 5 Fireballs
A copy of this book was provided by the publisher in exchange for my honest review

Get ready for dragons, robots, and an even more dangerous quest in the sequel to The Adventurer's Guide to Successful Escapes!

Anne, Penelope, and Hiro have returned to Saint Lupin's Quest Academy for Consistently Dangerous and Absolutely Terrifying Adventures, where there's only one way to leave: pass or fail. At the annual Quest Academy awards, they're recognized for their success in their first outing-Best Illegal Quest That Nearly Destroyed the Entire World--but a strange boy steals Anne's gauntlet and activates a new quest that pits them against all of dragonkind. Their charge: kill the dragon queen. The problem is, Anne doesn't want to kill any dragons! But ignoring a quest can have horrible consequences, just as killing the dragon queen would start an all-out war between people and dragons. To avert disaster, Anne and her friends will have to dodge robot attacks, defeat new foes, and survive the dangerous dragon trials just for a chance to explain.
With charming, funny text and lots of heart, The Adventurer's Guide to Dragons is the perfect read for anyone who likes fantasy with lots of laughter.
An unforgettable of adventure brimming with humor, friendship, dragons, and magic! This is the kind of book that gets kids exciting about reading. Be warned, this adventure is one you'll be reading at your own risk....

This adventure story follows a girl name Anne, and her friends Penelope and Hiro. When Anne is tasked with fulfilling a quest, it's going to take a whole lot of team work, smarts, and bravery to do the impossible. This is a hero's quest unlike one I've ever read before. It's the perfect blend of characters you wish you had as a real life friends, a lot of humor, and an imaginative, magical filled world with talking robots, dragons, a floating island, a volcano, unlikely heroes and so much more.

White's writing is captivating. This book is such a fun read not only because of the voice telling the story, it also has the perfect mix of adventure, and humor that makes reading this book so much fun, for both kids and adults. We also like that at the beginning of each chapter is an illustration and at the end of each chapter there is a tip /guide for being an adventurer. This is the kind of story I would have re-read as a kid. I love being able to read this book along side my daughter now.

I don't remember the last time I enjoyed reading an adventure story as much as I did reading this one. This is a fun, laugh out read with a cast of unforgettable characters, a richly detailed unimaginable setting, and an ending that will make you wish the next book in this series was already out. I really hope there will be many more books in this series. It makes the perfect read out-loud for a classroom setting or at home. It's also a great book for reluctant readers as well. I highly recommend picking this book up. 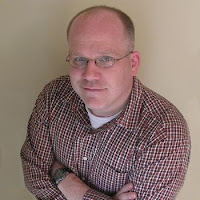 Wade hails from Nova Scotia, Canada, land of wild blueberries and Duck Tolling Retrievers. He teaches part-time, dabbles in animation, and spends the rest of his time as a stay-at-home dad. It is also possible he has set a new record as the slowest 10K runner. Ever. He owns one pretend cat and one real one, and they get along fabulously.
Website |  Twitter

Thank you Little Brown, (3) winners will receive a finished copy of THE ADVENTURER'S GUIDE TO DRAGONS (AND WHY THEY KEEP BITING ME), US Only. Ends on September 19th at Midnight EST!