Welcome to the next stop in THE ADVENTURERS GUILD, blog tour. I'm so thrilled to have authors Zach Clark and Nick Eliopulos stop by the blog today to share a guest about their new release (which was released on Tuesday). Before I share it, be sure to find out more about the book below and don't forget to get enter to win the giveaway at the bottom of this post. 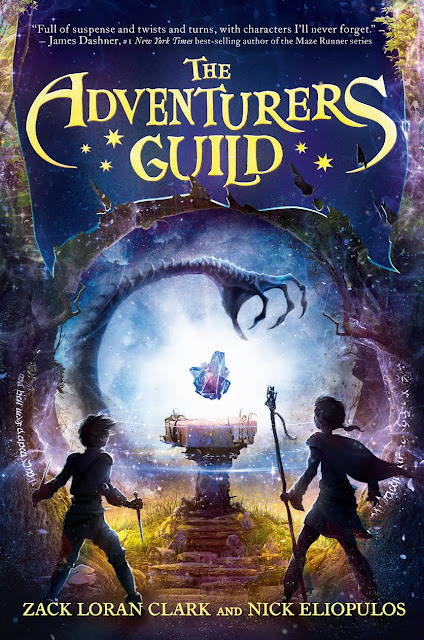 Few ever asked to join the Adventurers Guild . . . Their members often died young.

In one of the last cities standing after the world fell to monsters, best friends Zed Kagari and Brock Dunderfel have high hopes for the future. Zed desperately wishes to join the ranks of the Mages Guild, where his status as Freestone's only half elf might finally be an asset. Brock, the roguishly charming son of merchants, is confident he'll be welcomed into the ranks of the Merchants Guild.

But just as it seems the boys' dreams have come true, their lives take a startling turn . . . and they find themselves members of the perilous Adventurers Guild.

Led by the fearsome Alabasel Frond, the guild acts as the last line of defense against the Dangers-hungry, unnatural beasts from otherworldly planes. And when the boys uncover a conspiracy that threatens all of Freestone, Zed, Brock, and their new allies-including Liza, a fierce noble, and Jett, a brave dwarf-must prove their worth once and for all.

This start of a thrilling new series by talented duo Zack Loran Clark and Nick Eliopulos is sure to be a hit with readers who like their fantasies clever and action-packed, with a dash of snark.

FOCUSING ON THE GUILD (this is slightly long, but SO GOOD!)

“Adventurers die,” the woman said without preamble, then allowed a silence to settle for several long, uncomfortable seconds. Brock’s throat was dry, and he fought to keep his face impassive as her eyes swept across them. “They die horrible and useless deaths,” she continued at last. “Let the fair folk of Freestone call us whatever they like. ‘Adventurers,’ if it eases their conscience. But make no mistake: You are soldiers. Do you know the difference?”
Her eyes again swept over the group. Brock was unsure whether she expected an answer or merely paused for effect, but Liza spoke up: “Discipline,” she said.
The muscles of Alabasel’s scarred face tightened in a sour smile. “Discipline, yes. You will know a chain of command. You will follow orders at all times, in all things. But the key difference is this: Soldiers die, too. But they die with purpose. Their deaths mean something.”
“So much to look forward to.” Brock said it without really intending to, but he wasn’t sorry. He didn’t much care for the woman’s scare tactics.
And he wasn’t planning on being here long enough to get himself killed, meaningfully or not.
Alabasel regarded him coldly, and he felt the look mirrored in Liza’s sideways glance, but the other guild members gave no indication they were even paying attention, instead murmuring to one another or else looking on indifferently from their benches. All except for one girl, standing by the hearth, who wrung her hands as she watched them. She didn’t look much older than the apprentices, and she wore a silver charm around her neck—a crescent moon. Brock marked her immediately as the young wizard who had been drafted the previous year.
“Tell me, Apprentice Dunderfel,” Frond said, bringing Brock’s attention back to her steely eyes. “What does this guild’s sigil represent?”
Brock wasn’t entirely sure what to make of the question. “A sea of stars?”
“But why? What do the stars stand for?”
Brock had never really thought of it, but the longer he groped for an answer, the longer Frond would fix him with her uncanny stare. “Us?” he suggested. “The bright new recruits lighting the way to glory.”
A bearded man at the table chuckled into his small beer.
“A pretty sentiment,” Frond said, and she pulled several objects from her belt—flat, metallic circles with protruding blades. Throwing stars. “And like most pretty things, false.” She turned on her heel, tore a starred banner from the wall, and draped it across the table, knocking over a pewter stein without a care. The mutterings inside the hall came to an abrupt stop.
“Freestone,” she said, and she stabbed one of her throwing stars into one star of the flag, pinning it to the table. “Llethanyl,” she said, and stabbed a second star in the same manner. “Dragnacht. Vloegstan. Everglen.” She stabbed the three remaining stars. “Points of light in the darkness.” She looked back up at them. “So far as we know, that’s all that’s left. Every other city, town, or cottage—every other person—fallen to Dangers. Swallowed whole.”
Zed’s sweaty hand slipped from Brock’s grip.
“We keep it from getting worse,” Frond added. “Glory be damned.” And she walked away. 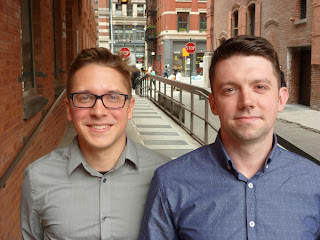 ZACK LORAN CLARK and NICK ELIOPULOS grew up in Florida and now live in New York. Best friends, they get together to play Dungeons & Dragons every week. Zack fervently hopes that magic is real; Nick desperately hopes that monsters are not. The Adventurers Guild is their first novel.

ENTER TO WIN
3 winners will receive a finished copy of THE ADVENTURER’S GUILD, US Only.


FOLLOW THE TOUR
Check out the next stop on the tour, tomorrow on Book Briefs.