Welcome to the next stop in THE LAST KIDS ON EARTH and the NIGHTMARE KING blog tour, hosted by Penguin Random House. I'm thrilled to share my interview with Max Brallier, as well as spotlight a series that kids absolutely love. This is such a great series for reluctant readers, as well as avid readers alike. 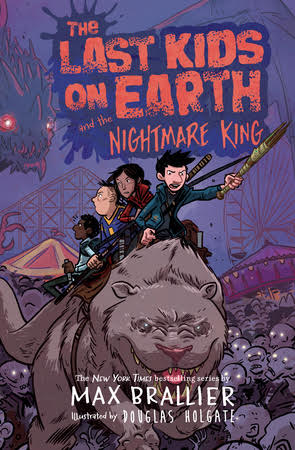 Life after the zombie apocalypse is pretty good for 13-year-old Jack Sullivan: he lives in a mind-clobberingly cool tree fort with his best friends, speeds through town playing Real-Life Mario Kart, has a crew of monster buddies, battles zombies on the regular, and generally treats life like it’s a videogame!  But then Jack’s friends make a startling discovery: they may not be the last kids on earth, after all. This is great news for everyone… except Jack. Once they’ve found other humans, his friends won’t stick around for long! Jack’s only hope for keeping things the way they are is to prove that everything here is perfect, life is crazy fun, and nothing else could be any better.  One problem: it’s hard convincing his friends that everything is great when they’re being hunted by a monstrous Nightmare King and an ancient evil who won’t rest until Earth has been devoured. Crud! Maybe life after the monster apocalypse is more complicated than Jack thought..... 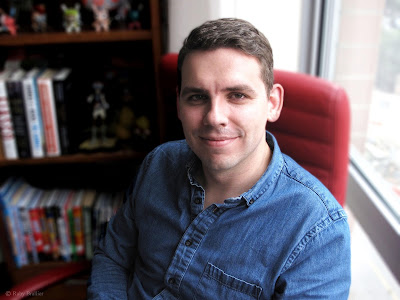 Recently, I had the chance to sit down and interview Nate about his newest release and his series.

Which character do you relate to the most, or would your former child self be friends with? Who was the most fun to write?

Jack. He's very much how I imagine who I'd be like as a hero. He's so easy to write. I imagine what I'd say when he's in certain situations, and that's what he says. Writing Jack and this series comes natural for me, because I thing of what I loved in 5th grade, and write that in. I do have to do research on some of the latest trends.

Quinn, Jack's best friend, is also another of my favorite things to write. I love their banter. I think of the things my best friend and I would say, and change it up a bit to fit for Jack and Quinn, and write it.

Writing, I write 100% what I want to read, and would have wanted to read as a kid. It makes it fun.

What came first, a character, a scene, or saying or the world building?

The treehouse, which is in a scene from the first book. I had a tree house as a kid, and I envisioned what it would be like to be a kid, a hero, on the porch of your tree house as the end of the world happens around you. You'd get to do what you want as the world ends, but what would you do?

I really lucked out with Doug (Douglas Holgate). He just gets it. In the beginning, Doug and I would talk about how I visualized the characters, the monsters, etc. I would describe what the monsters and characters look like and then Doug would then lay it all and he would just draw it. Doug makes the illustrations look so much cooler than I imagine them. I don't have to say much anymore.

Cover wise, no, I don't have say. I'm really lucky to have the great team I have. Doug has ideas, and we talk about it, and he'll create it. When he's done, he'll pass it to me to see it. It always looks great. I'm lucky to have Doug, because he takes what I've envisioned and makes it so much cooler. I'm lucky that I don't have to worry.

What's next after book three?

There will be fourth book, and I have more books coming out after that. I have a vision on how I want the series to end. I'd like to keep doing individual adventures with the characters.

What kind of writing advice would you give to young aspiring writers, or what's something you wish you could go back and tell your former beginning writer self?

I'd tell myself to keep a journal. It's fun to see the what I did as a kid, but journals are also a great place to get ideas from. I'd also say read more.

To young writers, write. Read. Keep a journal. Ideas come from writing, and reading. You'll get great ideas looking back on the things your write down now.

What sort of writing environment do you need to work in?

In order for me to write, I need to be in a public space, like a coffee shop. I can't work at home or in silence. I need back ground noise. I also listen to movie scores and sound tracks. They help set the mood for scenes I'm writing.

Thank you to Max and Penguin Kids for the interview! It was great to meet Max. One of the things I found interesting in the course of our interview, what Max said he like to write this series to pace of watching a movie. He's a big movie buff and reader. We might have talked about a few 80's classics.

If you haven't already check out The Last Kids On Earth series, do. This is a series that the kids at one of my local elementary schools I work at, love. Congratulations to Max, his book also made the Texas Blue Bonnet List! 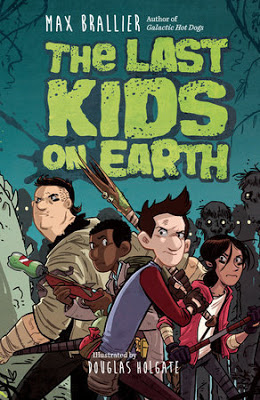 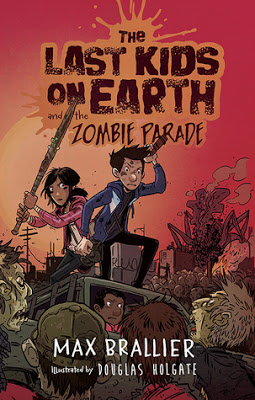 Jack is your average, everyday nerdy 13-year-old kid living in his treehouse alone amid a monster-apocalypse.  He's used to being alone because before the world ended, he was an orphan in foster care with 1 friend.
But soon Jack assembles what's left of their town-- Quint, Jack's 1 and only friend from before the monsters, Dirk, the middle school bully, and June, Jack's crush.  Together they (okay, mostly Quint) build post-apocalyptic gadgets, weapons, rides, and majorly upgrade Jack's treehouse.  They also go to battle with Blarg-- a monster that won't leave Jack and his friends alone.
This intro book was fabulous.  It hooked me and my son right from the start.  Jack's voice is relatable-- he's not afraid to make fun of himself, and you can't help but love the fact that he gets to be a kick-ass action hero in the apocalypse, where in the real world all he got to be was an awkward, unwanted 13-year-old.
The drawings in this book are awesome.  They're a mix of action shots, extensions of the conversations, and labelled maps and structures.

Jack and his friends are back, and they find out that not all the monsters are bad.  They meet a group of friendly monsters, currently residing in Joe's Pizza, who want to join forces in fighting an ancient evil.
When the kids realize that the zombies disappearing is actually a bad thing-- and that a door to the bad dimension is about to be opened, they have to use all their training to defeat a new kind of evil.
I thought this book was a fun adventure.  Where the first book was an intro to getting to know the characters, this book was getting to know the world they're living in now.  Each kid has a set of skills that they use to support each other.  They've basically become a family.

Max Brallier (www.maxbrallier.com) is the New York Times bestselling author of more than thirty books and games, including the first two books in The Last Kids on Earth series. He is the creator and writer of Galactic Hot Dogs, an ongoing middle-grade web serial and book series with Aladdin. He writes for licensed properties including Adventure Time, Regular Show, and Uncle Grandpa. Under the pen name Jack Chabert, he is the creator and author of the Eerie Elementary series for Scholastic Books. In the olden days, he worked in the marketing department at St. Martin's Press. Max lives in New York City with his wife.


I've got one signed book to giveaway to one lucky reader! This giveaway is for a signed copy of The Last Kids on Earth and the Nightmare King. To enter, please fill out the form below. Thank you to Penguin Kids for providing the book and to Max for signing it. *Open internationally.