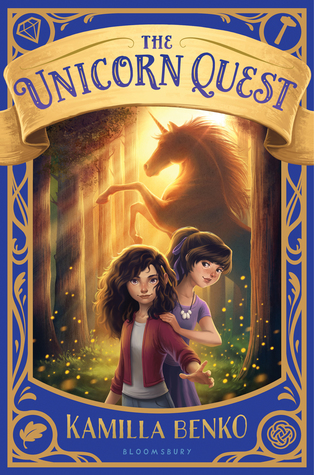 By: Kamilla Benko
Published by: Bloomsbury
Released on: February 6th, 2018
Series: The Unicorn Quest #1
Ages: 8 & up
Purchase from: Amazon
Add it to Goodreads
Rating: 4 Owlets
Thank you to Bloomsbury for providing an arc of this book in exchange for my honest review

Claire Martinson still worries about her older sister Sophie, who battled a mysterious illness last year. But things are back to normal as they move into Windermere Manor... until the sisters climb a strange ladder in a fireplace and enter the magical land of Arden. There, they find a world in turmoil. The four guilds of magic no longer trust each other. The beloved unicorns have gone, and terrible wraiths roam freely. Scared, the girls return home. But when Sophie vanishes, it will take all of Claire's courage to climb back up the ladder, find her sister, and uncover the unicorns' greatest secret.

An unforgettable, magical adventure. This is a fantasy story perfect for fans of magic, sibling relationships, and an unforgettable adventure to a whole new world. With mystery, danger, and betrayal, this is one middle grade fantasy readers will quickly fall in love with.

This is the kind of story that makes you think 'what-if', and leave you wishing you had your own portal door to magical world. Benko's rich world building, paired with her heartbreakingly beautiful sister bond, adds a layer to this story that makes it feel real, and that anything is possible. With the unlikeliest of friends, terrible danger, a quest for answers, and unicorns, this story will keep readers hooked.

This is a story that will leave readers feeling as though they themselves have emerged into a world that could be, and introduced them in characters who feel more like they could become your friends. This is the kind of book that keeps readers reading. We can hardly wait to read the next book in this series.

"Fans of magic and fantasy, especially those who love Madeleine L'Engle's A WRINKLE IN TIME or the dark, creepy atmosphere of Neil Gaiman's CORALINE can't miss this debut."  - Booklist, Starred Review

"An adventure-quest brimming with magic and heart, Benko reaches the child in all of us who secretly hopes that door is never just a door. Mesmerizing." - Roshani Chokshi, NYT bestselling author