We're so thrilled to be the next stop in THE MAD WOLF'S DAUGHTER blog tour, hosted by Penguin Kids. Today's stop includes an introduction to the book's characters. Before I introduce you to them, here's a little bit about the book, which was released last week. 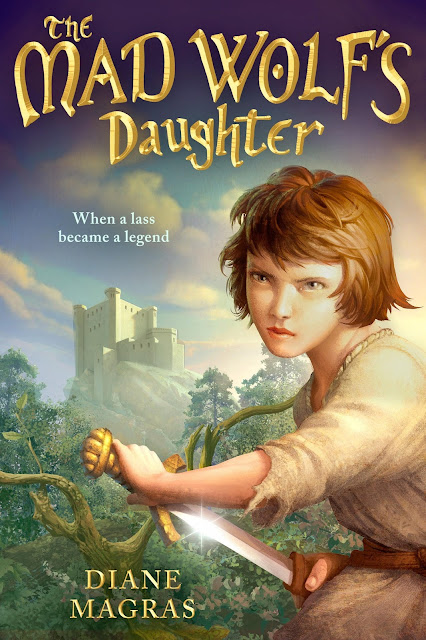 By: Diane Magras
Published by: Kathy Dawson Books (Penguin)
Released on: March 6, 2018
Ages: 8 & up
Purchase from: Penguin | Amazon | B&N
Add it to Goodreads

A Scottish medieval adventure about the youngest in a war-band who must free her family from a castle prison after knights attack her home--with all the excitement of Ranger's Apprentice and perfect for fans of heroines like Alanna from The Song of the Lioness series.
One dark night, Drest's sheltered life on a remote Scottish headland is shattered when invading knights capture her family, but leave Drest behind. Her father, the Mad Wolf of the North, and her beloved brothers are a fearsome war-band, but now Drest is the only one who can save them. So she starts off on a wild rescue attempt, taking a wounded invader along as a hostage.

Hunted by a bandit with a dark link to her family's past, aided by a witch whom she rescues from the stake, Drest travels through unwelcoming villages, desolate forests, and haunted towns. Every time she faces a challenge, her five brothers speak to her in her mind about courage and her role in the war-band. But on her journey, Drest learns that the war-band is legendary for terrorizing the land. If she frees them, they'll not hesitate to hurt the gentle knight who's become her friend.

Drest thought that all she wanted was her family back; now she has to wonder what their freedom would really mean. Is she her father's daughter or is it time to become her own legend?

DREST, the only daughter of the Mad Wolf of the North, is as tough as any of her brothers in the war-band they serve. She’s tall for her 12 years, muscular for her youth, and has the stamina of a soldier. Drest cares little about what she looks like. She wears her brothers’ hand-me-down tunics and hose and cuts her brown hair short with her dagger. Climbing slick cliffs, swimming through rough seas, and winning practice sword battles with her favorite brother are what’s meaningful to this Scottish lass.

She knows who she is: a warrior. And she knows what her family is: a war-band who never lose a battle. She’s so certain of her and their identities that when enemy knights capture her family and drag them away to a castle to be hanged, it doesn’t take her long to go after them.

And yet Drest isn’t just a warrior: She is capable of pity, and of great love. That starts with her brothers and fearsome father, but extends to others as well, as long as they don’t disappointed her ideas of justice and honor. When she meets Emerick, an enemy knight, she can’t help but to like him, at least a little bit; he reminds her of one of her brothers. Though his insults and manner eventually test her patience, she knows she needs him—and he’s so wounded and so helpless that it’s clear how much he needs her. It feels good to be needed, to be important.

Brave, fiercely loyal, deeply affectionate, and brutally honest with those she trusts, Drest will always stand up for anyone who needs help. She’s starting to become a legend, after all.

EMERICK, a 16-year-old knight from Faintree Castle, has grown up in a world of battle, responsibilities, rules, and secrets. Deep inside, he’s always known that he can trust no one, but he never fully understood that until a knight from his castle attacked him and left him for dead. Haughty with strangers, Emerick has a sharp sense of what it means to be noble and good, and strives to be both. Drest’s father is his worst enemy, but he soon spots Drest’s own instinctive chivalry. While they’ll never agree about her father’s crimes, he can tell that she’s a kindred spirit.

Tall, graceful, and handsome, Emerick expects deference from the world. Yet when he finds himself abandoned, badly wounded, and in need, he quickly adapts to his situation. Too proud to try to win Drest over with sweet words, Emerick says what words he thinks he must to gain an upper hand in their relationship. He swallows his frustration when it doesn’t work. But soon she is more than his enemy’s daughter; she reminds him too much of a noble girl he knew when he was small—a girl he worshipped, a girl who died in violence by Drest’s father’s hand.

Proud, stern, noble, and capable of strong friendship, Emerick has led a privileged yet cold life, barren of love and tenderness after the death of that noble girl. He has lived most of his life with that missing part. Perhaps this journey with his worst enemy’s daughter will help to fill it.

TIG tries not to think of his past; it doesn’t him do any good to remember what happened to his mother when he was only six years old. And he’s lived another life for six years in the home of a loving foster-family: a gruff father, a tender brother, and a strong sister who always protects him when he gets into trouble with the other village boys.

Tig also has more: Mordag his trained crow. The two of them have an uncanny relationship: She knows when he needs her, and he trusts her utterly.

Since the tragedy that marked his young life, Tig has taught himself to observe and to control the people around him. Part of it is his storytelling skill: He can weave just about anyone into his way of thinking. He knows what motivates people, what buttons to push, and how much to push them—usually. Quietly proud, intensely clever, and very good at trickery, Tig rarely misjudges his abilities.

Tig is capable of great kindness himself, and sees in Drest the most extraordinary person: a warrior whom he thinks he can strengthen with the power of suggestion. He’s flattered that she listens to him. She is, after all, a lass unlike any person he’s ever met, a hero from a legend, a friend worthy of great sacrifice—and perhaps more. (Though who knows if his courage will ever allow him to tell her that.) 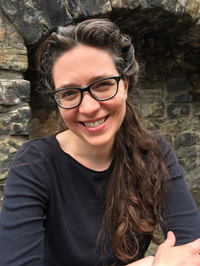 Diane Magras grew up on Mount Desert Island in Maine. The Mad Wolf's Daughter is her debut novel. She is the editor, writer, and chief fund raiser for the Maine Humanities Council. She volunteers at her son's school library, and is addicted to tea, toast, castles, legends, and most things medieval. Diane lives in Maine with her husband and son and thinks often of Scotland, where her books are set.