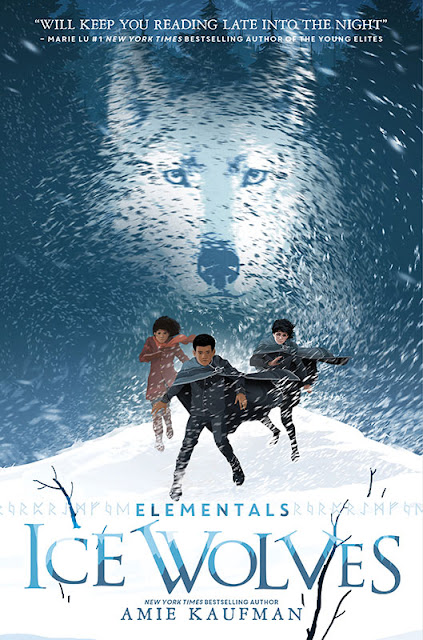 Everyone in Vallen knows that ice wolves and scorch dragons are sworn enemies who live deeply separate lives. So when twelve-year-old orphan Anders takes one elemental form and his twin sister, Rayna, takes another, he has to question whether they are even related. Still, whether or not they’re family, Anders knows that Rayna is his best and only true friend. She’s nothing like the brutal, cruel dragons who claimed her as one of their own and stole her away. To learn what he needs to rescue her, Anders will have to enlist at the foreboding Ulfar Academy, a school for young wolves that values loyalty to the pack above all else. But for Anders, loyalty is more complicated than blind obedience, and friendship is the most powerful shape-shifting force of all.

I have been a huge fan of Amie's cowritten YA books for a few years now, so when I heard she was writing her first solo book I was very excited. Even more excited that this is her first middle grade book. I was not disappointed. As many have said before, whe is awesome at YA but she can now say she is fabulous at middle grade too.

Our story starts with twin brother and sister Anders and Rayna who are orphans living on the streets. They need to scavenge and steal their food from where they can and are quite a team together. When by accident they end up at the trials held each month for children to see if they can turn into Ice Wolves, things start taking a twist no one expects, least of all Anders and Rayna. The Ice Wolves are an army of part human part wolves who protect the city from the dragons who threaten their safety. When Anders turns into a wolf and his sister is stolen away by the dragons, he decides to join the academy for training young wolves, in the hope it will give him the skills to find his sister.

Told in the point of view of Anders, it is a great story of friendship, and making those around you your family. Anders at first is an unlikely hero, he is used to having his sister around to make decisions and even to talk to adults. He is used to hiding on the streets and fending for himself. But once he ends up in the academy he learns more about himself and that he can trust other people to be there for him. The ending will knock your socks off and wanting more ASAP!