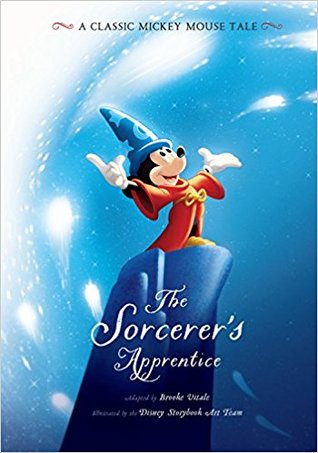 By: The Disney Book Group
Illustrated by: Disney Storyboard Art Team
Released on: January 2nd, 2018
Ages: 6 & up
Purchase from: Amazon | B&N
Add it to Goodreads

Mickey Mouse is an apprentice to a great and powerful sorcerer. When Mickey tries on the Sorcerer's magic hat, he casts a magical spell to finish his boring chores. But things start to go very wrong. Will Mickey be able to stop the magic he's unleashed? This beautifully illustrated, deluxe retelling of The Sorcerer's Apprentice, based on Goethe's original poem and one of the most beloved stories from Walt Disney's classic film Fantasia, is a must-have for any Disney fan!

A must have for Disney fans of all ages. This beautifully illustrated book retells one of Disney's classic stories, The Sorcerer's Apprentice, from their movie, Fantasia. What makes this book one for all ages, is that it pays homage to Disney's classic illustration and storytelling. Whether you're a fan of Fantasia, or just a die hard Disney fan, this book is worth picking up. The illustrations alone are worth it. Plus there's a foldout poster included in the book.

Also worth checking out: 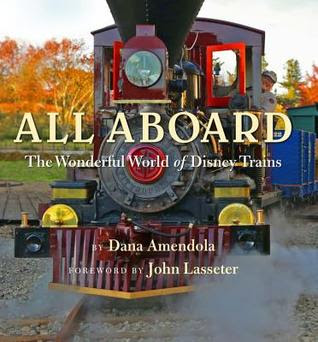 By: Dana Amendola
Published by: Disney Press
Released on: September 1st, 2015
Ages: 6 & up
Add it to Goodreads

It's usually said that it was "all started by a mouse" but did you know that iconic mouse was invented while on a train ride? Since its inception, The Walt Disney Company has often ridden the rails to tell its stories, whether in a theme park, live-action movie, or animated film.All Aboard explores the wide variety of trains in Disney's history, accompanied by rare photographs from the Disney Archives and heretofore unseen conceptual artwork behind the trains in the movies and theme parks. Never before has such a comprehensive focus been exclusively trained on this fascinating topic. Fans of Disney history, rail history, and armchair travelers alike will be captivated by this museum-quality book.

Another must have for Disney fans, and those who love trains. This book gives it's readers a look into the history of Disney's trains with it's mixed of never before seen pictures, artwork, and photos. It's like looking through a Disney vault into the history of it's park trains from the past and the present. Definitely worth picking up. 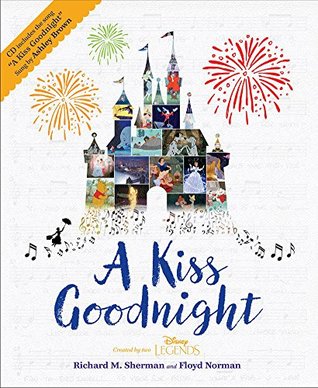 By: Richard M. Sherman
Illustrated by: Floyd Norman
Published by: Disney Editions
Released on: August 22nd, 2017
Ages: 4 & up
Add it to Goodreads

A Kiss Goodnight is a valentine to Walt Disney from the legendary songwriter Richard Sherman. Opening with a touching story about what inspired Richard to write the song, A Kiss Goodnight tells the story of how a young Walt Disney was enchanted by fireworks and how he kept his promise to send all his guests home with a special kiss goodnight. Beautifully illustrated by Disney legend Floyd Norman A Kiss Goodnight will be the must-have picture book for families to enjoy together and for Disney fans to treasure. The book will feature a CD with the song sung by Broadway star Ashley Brown along with a download as well

A must read for Disney fans. This is the illustrated story of Walt Disney, and the story that inspired the song. Hidden through out the book are various Disney easter eggs fans will enjoy seeing.

* Thank you to Disney Hyperion for providing a copy of each book, in exchange for my honest review.
Posted by Mundie Kids at 10:19 AM Labels: 2018 Book Review, 5 stars, A Classic Mickey Mouse Tale, A Kiss Goodnight, Book Review, childrens picture books, Disney Hyperion, Disney Press, The Sorcerer's Apprentice, The Wonderful World of Disney Trains