Scholastic has some great children's books they've recently released and over the next couple of days I'm going to be sharing a series of reviews for them. Here's some of their most recent releases: 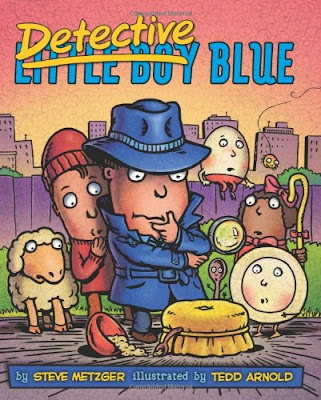 Miss Muffet is missing . . . and Detective Blue is on the case!

"Today started like any other day. The dish ran away with the spoon."

Little Boy Blue is all grown up, and he's a detective working to find Miss Muffet. Join in the fun as Detective Blue tries to crack the case with the help of his nursery rhyme friends. The fun is never-ending as Detective Blue interrogates grown-up nursery rhyme characters in order to solve the Missing Muffet Mystery. Kids, parents, and teachers can find a list of referenced nursery rhymes and go back into the story to find the characters.

Who do you call when one of the most beloved nursery rhythm characters goes missing? Why Detective (Little Boy) Blue of course! When Miss Muffet goes missing it's up to Detective Blue to find her. From the dish & the spoon, Mary and her little lambs, Humpty Dumpty, the spider that scares little Miss Muffet and more, Detective Blue talks to them all.

Written and illustrated similar to a comic book layout, this story is one my kids enjoyed. It's easy for kids to follow along, the story line is funny, the illustrations match the book perfectly and they get to see a different side to the beloved nursery rhymes they've either learned or are still learning about. We enjoyed this book and any book that gets laughs from my kids is a book I recommend picking up.
________________________ 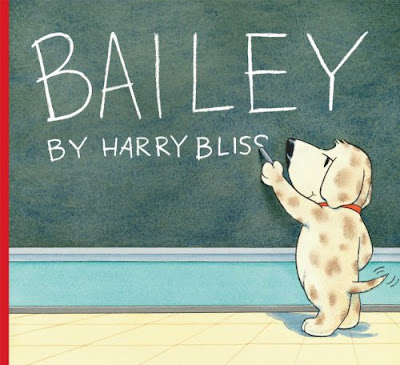 When Bailey tells the teacher that the dog ate his homework, he's tattling on himself. Bailey, you see, is not your average canine; he is a studious pooch enrolled in the local school—and we're not talking about kennel. Harry Bliss' delightful new picture puts a whole new slant on learning. The perfect back-to-school prompt. 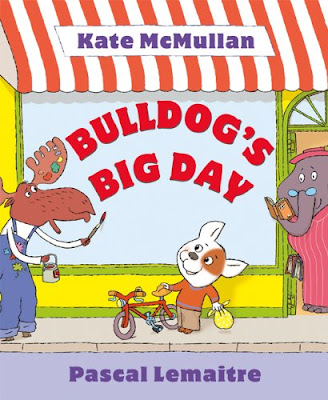 Award-winning author Kate McMullan tells the story of Bulldog, a lovable pup who is searching for a job, with the help of his friends.

Everyone is on their way to work in Bulldog's Big Day-everyone, that is, except Bulldog. As his friends help him find a job, Bulldog's good intentions clash with his hilarious clumsiness. He crashes a ladder through Giraffe's firehouse roof, discovers his fear of heights when he tries to wash windows with Spider, sends Moose's canvas flying when he sneezes, and tries Elephant's patience when he's caught reading the books he's supposed to shelve. In the end, Bulldog finds out that you have to love your job in order to be good at it, and he opens a bakery with his friends' support.

Bulldog's Big Day is chock-full of comical characters presenting different jobs for inquisitive youngsters. Readers get a glimpse of the inner workings of a fire station, a bookstore, a sign store, and a window washing company. But in the end, it is Bulldog's love of making cookies that helps him find out what his perfect job will be. Kate McMullan's simple words paired with Pascal Lemaitre's countless objects create an exciting new picture book about the people and places around us (quoted from Goodreads).

Bulldog is on the hunt for the perfect job. Unsure of what he wants to do, he decides to try a variety of jobs, from firefighter, bookseller, to window washer, and more. Unfortunately for Bulldog, something goes wrong for him at each job. What I enjoyed about Bulldog was his determination to find the perfect job for him and in the end he finally discovers what he wants to do.

Bulldog's Big Day was a good read and while I enjoyed the layout, which reminds me of the Richard Scarry books I loved as a kid, it wasn't a huge hit with my kids. I think this is a book that fits better with 5-7 year olds vs 3-4 year olds. There's a lot going on that made it easy for my daughter to loose interest quickly. It is however a fun read for older kids as they get to see the different jobs that Bulldog tries and what those jobs entail. I'd recommend it for kindergarten aged kids and older.
Posted by Mundie Kids at 8:04 AM Labels: 3 stars, 4 stars, Bailey, Book Review, BULLDOG's BIG DAY, Detective Blue, Harry Bliss, Kate McMullan, Pascal Lemaitre, Scholastic, Steve Metzger, Tedd Arnold