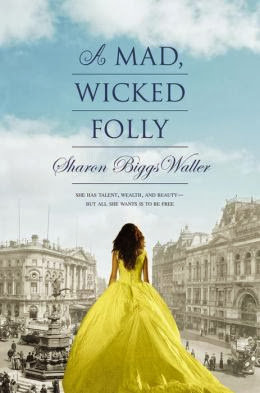 By: Sharon Biggs Waller
Published by: Viking
To Be Released on: 1/23/14
Pre-Order it from: Amazon | Barnes & Noble
Add it to Goodreads

Welcome to the world of the fabulously wealthy in London, 1909, where dresses and houses are overwhelmingly opulent, social class means everything, and women are taught to be nothing more than wives and mothers. Into this world comes seventeen-year-old Victoria Darling, who wants only to be an artist—a nearly impossible dream for a girl.            After Vicky poses nude for her illicit art class, she is expelled from her French finishing school. Shamed and scandalized, her parents try to marry her off to the wealthy Edmund Carrick-Humphrey. But Vicky has other things on her mind: her clandestine application to the Royal College of Art; her participation in the suffragette movement; and her growing attraction to a working-class boy who may be her muse—or may be the love of her life. As the world of debutante balls, corsets, and high society obligations closes in around her, Vicky must figure out: just how much is she willing to sacrifice to pursue her dreams?

This is a book I also featured this morning on Mundie Moms, here. I can't tell you guys how excited I am to read it. I'm even more excited when I found out it's a book that is for readers 12 & up, hence making this one of those fabulous reads I get to feature on both Mundie Moms and Mundie Kids. I said on MM's that I was hooked with the setting, title and cover of the book, but really knowing that there is a strong main female character (at least from the sounds of the synopsis) is one of the things that has me anxiously waiting to read this one!

What book are you waiting on?
Posted by Mundie Moms at 6:43 AM Labels: A MAD WICKED FOLLY, SHARON BIGGS WALLER, VIKING CHILDRENS BOOKS, Waiting On Wednesday