Fun Facts with THANKSGIVING DAY THANKS from Harper Collins Childrens

Looking for a fun, educational way to teach your children about Thanksgiving this week? Check out this fabulous Fun Facts with THANKSGIVING DAY THANKS from Harper Collins Children's via their Facebook page!

Fun Facts Include:
About the Book: 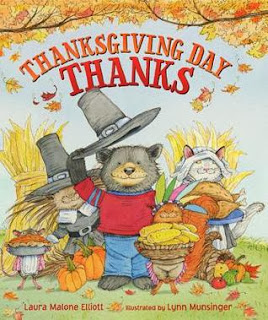 Laura Malone Elliott and Lynn Munsinger have created another holiday story about the lovable characters from A String of Hearts.
Perfect for a teacher's classroom or a child's home bookshelf, Thanksgiving Day Thanks tells the story of Sam trying to figure out what he's thankful for.Sam also works on a special project to share at the Thanksgiving feast—his own version of the Macy's Thanksgiving Day Parade!
Parents and teachers will find inspiration for other Thanksgiving crafts and projects in this charming and funny storybook. A section at the back includes fun Thanksgiving facts.
Full of creativity, humor, and heart, Thanksgiving Day Thanks celebrates friendship, family, and the many other blessings in our lives for which we give thanks.

Purchase it from: Amazon | Barnes & Noble
Add it to Goodreads

Don't miss checking out this Thanksgiving Day Thanks book trailer!

I've already got my copy on hold at my local book store! This sounds like a must have book in my home.