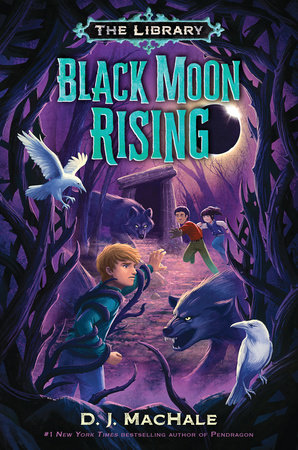 By: D.J. MacHale
Published by: Random House
Released on: October 3, 2017
Series: The Library Series #2
Ages: 8 & up
Purchase from: The Publisher | Amazon | B&N
Add it to Goodreads
Rating: 4.5 Owlets
A copy of this book was provided by the publisher in exchange for my honest review


The next fast-paced, thrilling adventure from bestselling author D. J. MacHale! Check out a book and fall under its spell . . . literally. Marcus is an agent of the Library—a place filled with tales that don’t have an ending. Mysteries that won’t be solved until Marcus and his friends Theo and Lu step in to finish them. Before it’s too late. Because mysterious accidents are disturbing a middle school in Massachusetts. Windows shatter for no reason. Bleachers collapse at a pep rally. Most of the students think they’re just having a string of bad luck, but Marcus suspects something a lot more dangerous. Something like witchcraft. When the black moon rises, this story must come to an end . . . one way or another.
A fun, thrilling, action packed adventure. Marcus, Theo and Lu are back! This time there's another story that needs to be finished, or else something worse than what happened in book 1, will be unleashed.

Black Moon Rising thrusts middle grader readers right back into the heart of a thrilling, awesome storyline. Told from multiple points of views, including that of the story itself (my favorite), this book is full of humor, wit, charm, magic, danger, and of course friendship. Wait, did I mention there are witches, wolves and ravens too? This book was such a great read, we couldn't put it down!

Marcus, Theo and Lu are what friendship in middle grade books is all about. Just like the first book, this fabulous trio of friends makes you wish you had your own group of awesome, diverse friends, who make fighting frightening things seem fun. These three have a solid friendship, and I absolutely love watching them work together to solve the mystery, and foil the evil plan. Being an agent of the Library is no easy thing for Marcus. It's a complicated job to give a book an ending that needs it, in order to stop horrible things from happening. His friends play a huge role in helping him out.

MacHale knows how to engage his readers. His writing is fun, engaging, and down right entertaining.  Though it's part of The Library series, this book can definitely be read on it's own. I recommend picking up the first book so that some things mentioned that previously happened, make a little bit more sense.

Perfect to read around Halloween (and off course through out the entire year), this story has a wicked twist, and plenty of fun that will keep readers hooked till the very end! D.J. MacHale's The Library series makes reading fun! I only wish I had, had this book when I was younger.

ABOUT THE FIRST BOOK IN THE SERIES 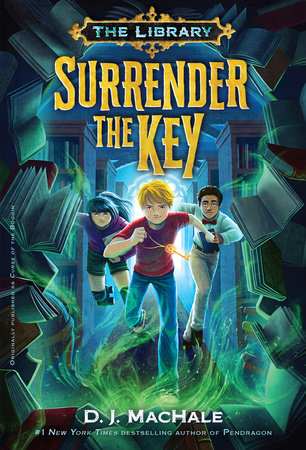 By: D.J. MacHale
Published by: Random House
Released on: September 6, 2016
Series: The Library Series #1
Ages: 8 & up
Purchase from: The Publisher
Add it to Goodreads

Enter the Library, where no one knows how the stories end . . . and finding out will be terrifying.

It’s called the Library, and you can get there with a special key. But beware! Don’t start a story you can’t finish. Because in thislibrary, the stories you can’t finish just might finish you.

Marcus O’Mara is a 13 year old guy at a crossroads. He constantly finds himself in trouble at school, with his friends, and with his adoptive parents. Marcus doesn’t believe things can get any worse for him…until they get worse.

He begins seeing strange and impossible visions; gets thrown into paranormal danger and is haunted by a mysterious ghost with a singular goal: to give him a key.

It’s a key that opens the door to a mysterious library. When that door opens, the incredible adventure for Marcus and his friends begins as they learn the truth about Marcus’ past and uncover the strange world of unfinished stories that are found on the shelves of the Library.